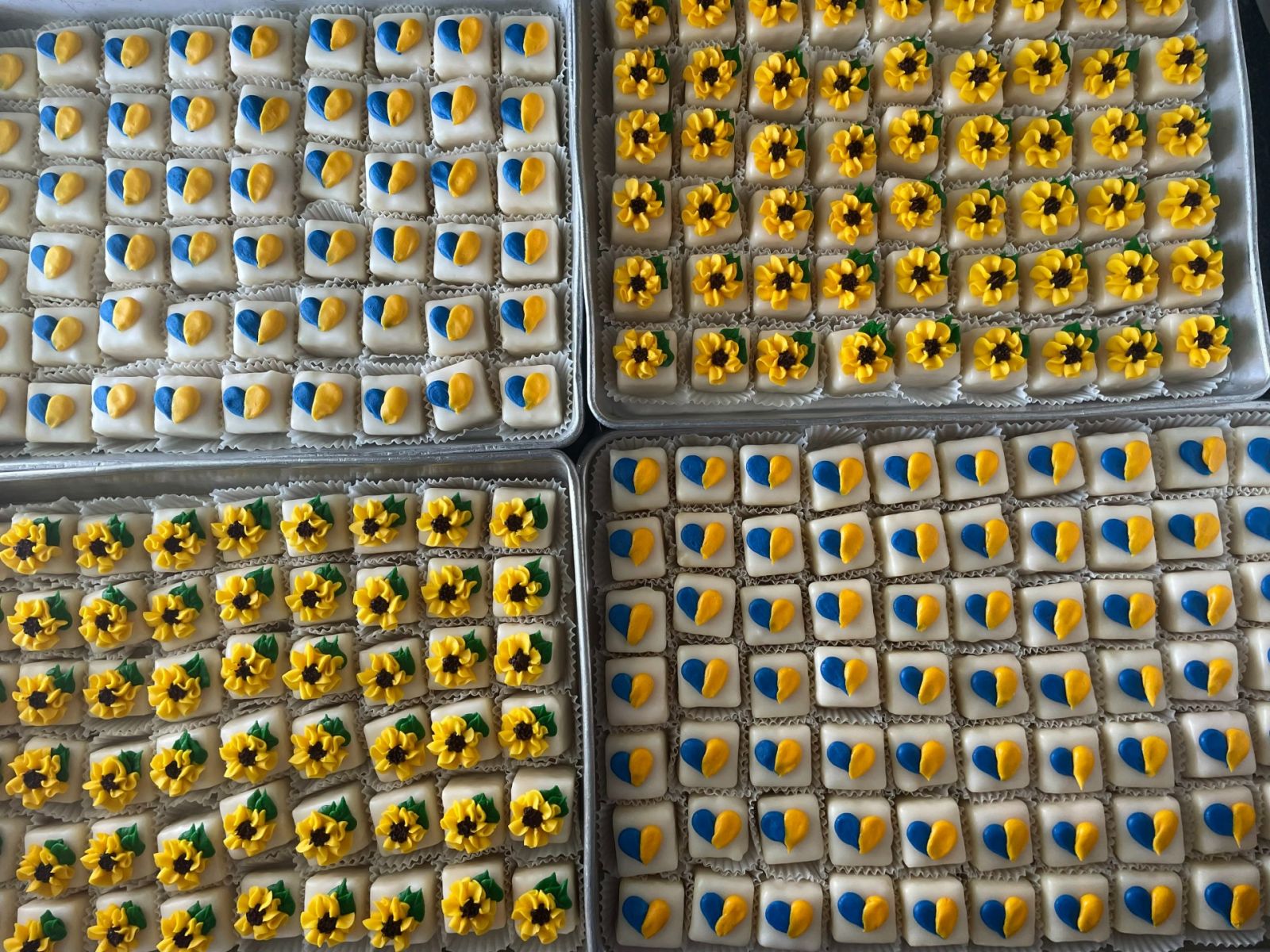 She still crafts cookies, cupcakes, croissants and other baked delicacies for online orders for the Columbia shop, but inflation and the labor shortage haven’t been the only current affairs to affect her operations.

As the Russian military began to tear through Ukraine in February, sparking what American think tank the Atlantic Council calls the biggest refugee crisis since World War II, thousands of Americans watched in horror from their living rooms.

Nobles and her one employee were so busy rushing around the kitchen to fulfill 100 orders of petit fours the day SC Biz News reached out to her, so she only had a moment to catch her breath and respond via email.

“Our petit fours — we call them party fours — are one of our top selling items, and since I was able to incorporate the Ukrainian national flower, a sunflower, and hearts that are half yellow, half blue, I knew it would appeal to many people who wanted to help in some way,” she told SC Biz News.

The French Culinary Institute-trained baker modeled the drive after a fundraiser she had launched for a regular customer who had lost her home to flooding.

Following the first days of the invasion, she contacted World Central Kitchen, an emergency food relief nonprofit founded by José Andrés, the dean at the New York City-based institute she attended. She then donated 100% of the proceeds from the special party fours, offered in two special online events, toward the organization.

“I do not know him personally, but he was a dean at my culinary school in New York City and I went to a demonstration he put on,” she said. “He is a great chef with a big heart.”

Since the launch of World Central Kitchen’s Chefs for Ukraine mission, the nonprofit has served 16.4 million meals to Ukrainians across eight countries and in more than 100 cities and towns in Ukraine, according to data from the organization as of April 30.

Donations from Silver Spoon and other fundraisers helped World Central Kitchen to transport 8 million pounds of food to hundreds of refugee assistance centers and shelters, as well as the kitchens of 440 restaurants, food trucks and caterers.

“This is the reality here,” Nate Mook, a World Central Kitchen employee said in a statement after the attack. “Cooking is a heroic act of bravery.”

The Yaposhka kitchen team — several of the thousands of chefs, bakers and cooks on the ground in Ukraine with World Central Kitchen — was up and running again in a new location within two days, according to the organization.

At home in South Carolina, Nobles shared how crafting the petit fours was a bittersweet and meditative experience.

“I really had a more somber experience making these, because the whole time I was decorating them, all I could think of was how incredibly awful it would have to be to leave your home and family behind,” she said. “It made me extra thankful that I live in the U.S. and have never had to experience anything like this.”