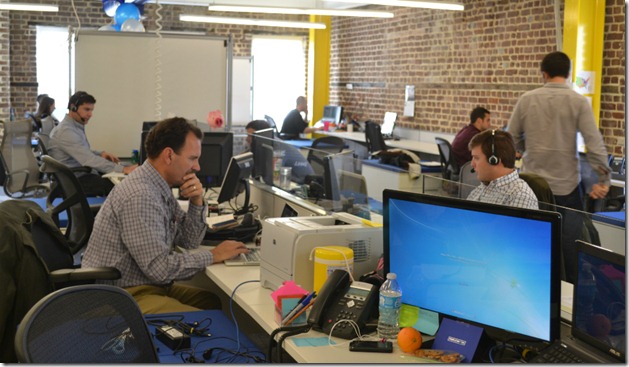 Monday afternoon, Nate DaPore, the CEO of Charleston-based PeopleMatter, walked down four flights of stairs to sit down to talk about a new $19 million investment in his company.

He couldn’t use the elevator at the PeopleMatter’s new office on King Street because, as he explained, South Carolina has only two elevator inspectors and companies have to schedule an inspection weeks in advance. PeopleMatter is putting the finishing touches on its new world headquarters on King Street. Aside from the elevator and a few other details, the office is fully functional after a renovation of a dilapidated building. The company plans to spend $18.8 million over the next four years on the office complex that includes an adjacent building.

The company just closed on the latest round of venture capital financing led by Scale Venture Partners, whose other portfolio companies also include Box, Hubspot, DocuSign and Omniture, which went public in 2006 and was purchased by Adobe in 2009. With the latest investment, PeopleMatter has now raised more than $47 million, with the $19 million representing a new era for the company, DaPore said.

“This is really a growth equity round for us. We’re beyond the startup phase, and we’re now moving into really the high-growth phase of the business,” DaPore said. “We have a wonderful product portfolio that we continue to get tremendous feedback from the marketplace, and we’ve got a fantastic market opportunity we’re going after right now.”

Specifically, DaPore said the company will use the latest round of financing to accelerate the company’s growth, including scaling sales and marketing, expand PeopleMatter’s product portfolio and acquire other companies.

“We do have a couple of acquisitions we’re looking at right now,” DaPore said. “They’re companies that are complementary to our product portfolio. It’s around product. One is potentially around market, which would be opening up a new market for us. I’m confident we’ll have one of them done in the next six months.”

Last year, Morgenthaler invested $14 million in PeopleMatter, which at the time doubled the amount of money raised by the company, and was the first time a major Silicon Valley venture capital firm invested heavily in a Lowcountry tech company.

By focusing on products to manage hourly workers and associated costs, PeopleMatter’s products target an underserved market with a lot of potential for growth, said Rob Theis, a partner at Scale Venture Partners who is joining the PeopleMatter board of directors.

“The company is setting a new standard for HR solutions for hourly workers, and we are excited to be working with Nate and his team to scale their business and further disrupt the industry,” Theis said in a statement.

PeopleMatter has three products on the market, including a mobile application that gives companies and employees tools and services to manage HR activities and associated costs. The company is part of an emerging tech sector known as software as a service.

So far, PeopleMatter’s products have focused on hiring, training and scheduling. DaPore said the company grew its customer base 288% last year and entered into a retail vertical. The company’s fourth product, Engage, is expected to launch next year, and PeopleMatter has plans for other products to respond to issues such as the ongoing implementation of health care reform.

PeopleMatter was founded in 2009 and began in the Charleston Digital Corridor. The company later expanded to The Navy Yard at Noisette in North Charleston, and moved into the company’s new headquarters at 466 King St. last week after a two-year renovation project of the historic structure. The office is fully operational, but contractors fill the corridors and stairwells working alongside programmers and sales people, and office workers answer phones while crews in hardhats adjust door knobs and discuss finishing details.

The company has three offices, including San Francisco and Atlanta, with about 80 employees in Charleston. PeopleMatter plans to employ 265 people at the new location in Charleston during the next five years after it takes over an adjacent building.

After a 25-minute interview, DaPore went back up the four flights of stairs to spend five minutes getting ready to talk to a reporter with TechCrunch, a national technology blog and online news outlet. Afterward he planned to tell his company about the partnership with Scale Venture Partners who recently visited Charleston to get a feel for DaPore, PeopleMatter’s culture and the business.

“We really got into the weeds with them on where we wanted to take the business,” DaPore said. “For us, it’s about building a 100-year company. That’s what we’re really here to do.”

For more on this story, see the March 11, 2013, edition of the Charleston Regional Business Journal.

Correction: A previous version of this story mischaracterized the amount of money People Matter spent on renovating the building at 466 King Street. The company plans to spend $18.8 million over the next four years on the office complex that includes that address and an adjacent building.