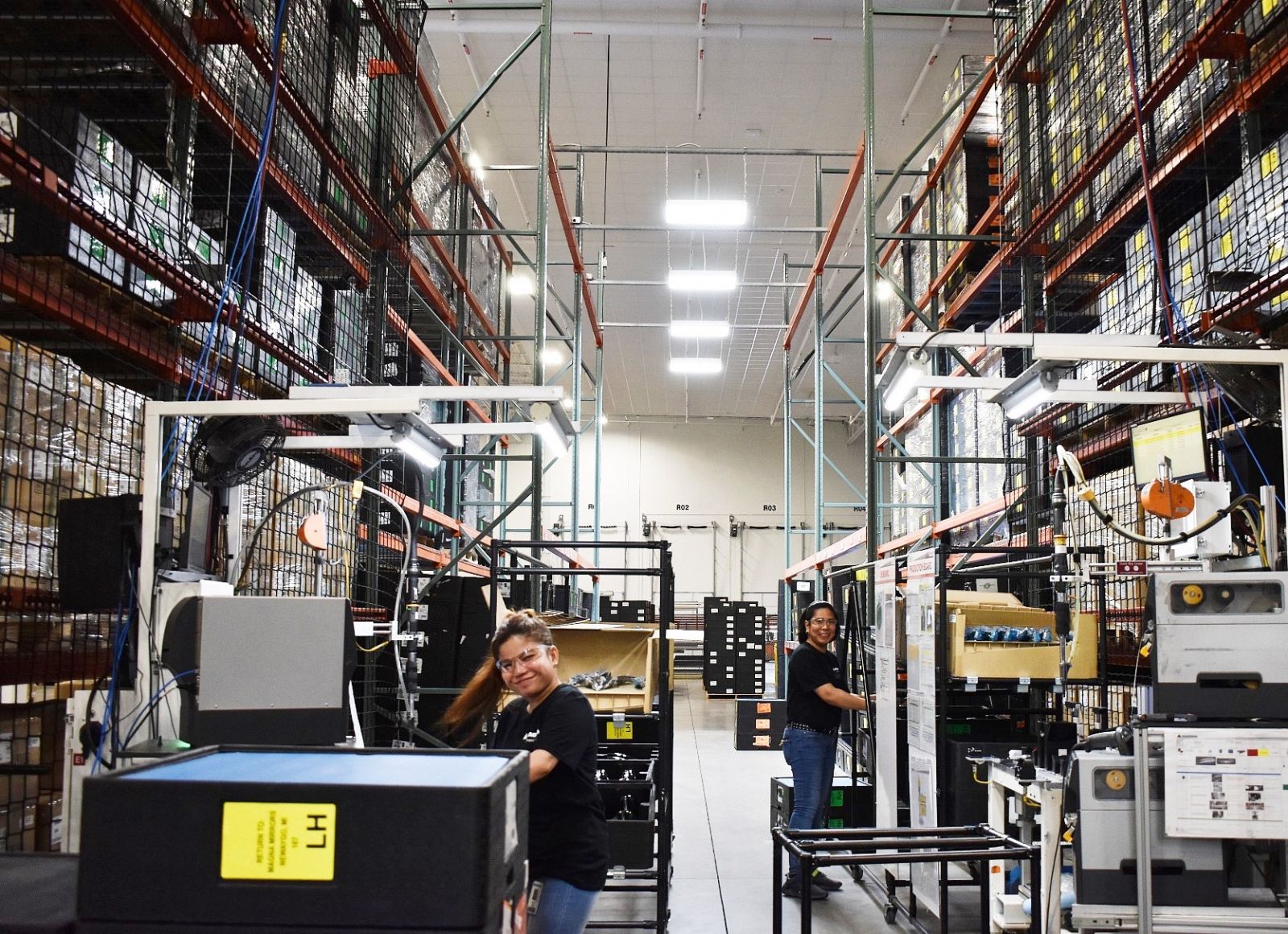 This story first appeared in the April 18 print edition of GSA Business Report.

Over a year ago, Magna Mirror’s team told a customer that the company had a “chaotic” warehouse.

The customer then deployed an audit team to investigate.

What the team really meant was that the company used a common strategy called dynamic warehousing where items don’t always have a predetermined place once they come through the dock, according to Group General Manger Steven Salvatore.

But, as the team discovered, not everyone interprets that word the same way.

In any case, Salvatore won’t use it to describe the company’s new 170,000-square-foot warehouse and manufacturing facility in Duncan, because now, every part that enters the facility is put in its place.

The new location has about 70,000 more square feet than its Greer predecessor, but really, it’s Magna Mirror’s use of narrow aisle design and flow racks that have made the difference.

When Salvatore led a tour through the new warehouse during the Duncan facility’s grand opening on April 7, tiers of boxes appeared poised to tumble into the aisle at any time. Salvatore reminded those on tour the sight was an illusion created by the flow racks. The system was, indeed, less chaotic than the alternative.

Those who don’t work in logistics may have first encountered flow racks in the dairy section of a grocery story. The first carton put on the rack rolls down to the front of the display: first in, first out. Warehouses use the same type of rack, just on a larger scale.

“We used to be in a very, let’s say under-invested facility, and there was a lot of uncertainty of what we were going to do and what we were going to be, and we quickly defined that,” he said. The facility, the company’s sixth in the state, will hold an incoming intelligent mirror line for Volvo Cars, plus an in-house plastic molding operation — all in addition to the manufacturer’s growing Mercedes and BMW supply lines.

“Today’s production volume is roughly about 1.6 million mirrors that are delivered locally and across the world, and we are excited to add the Magna Xfinity mirror technology to our production portfolio,” Matthias Steck, general manager of the new Magna plant, said during the facility’s opening ceremony. “Our focus was to combine advanced manufacturing that you’ll see later in our assembly lines with a modern workplace design.” 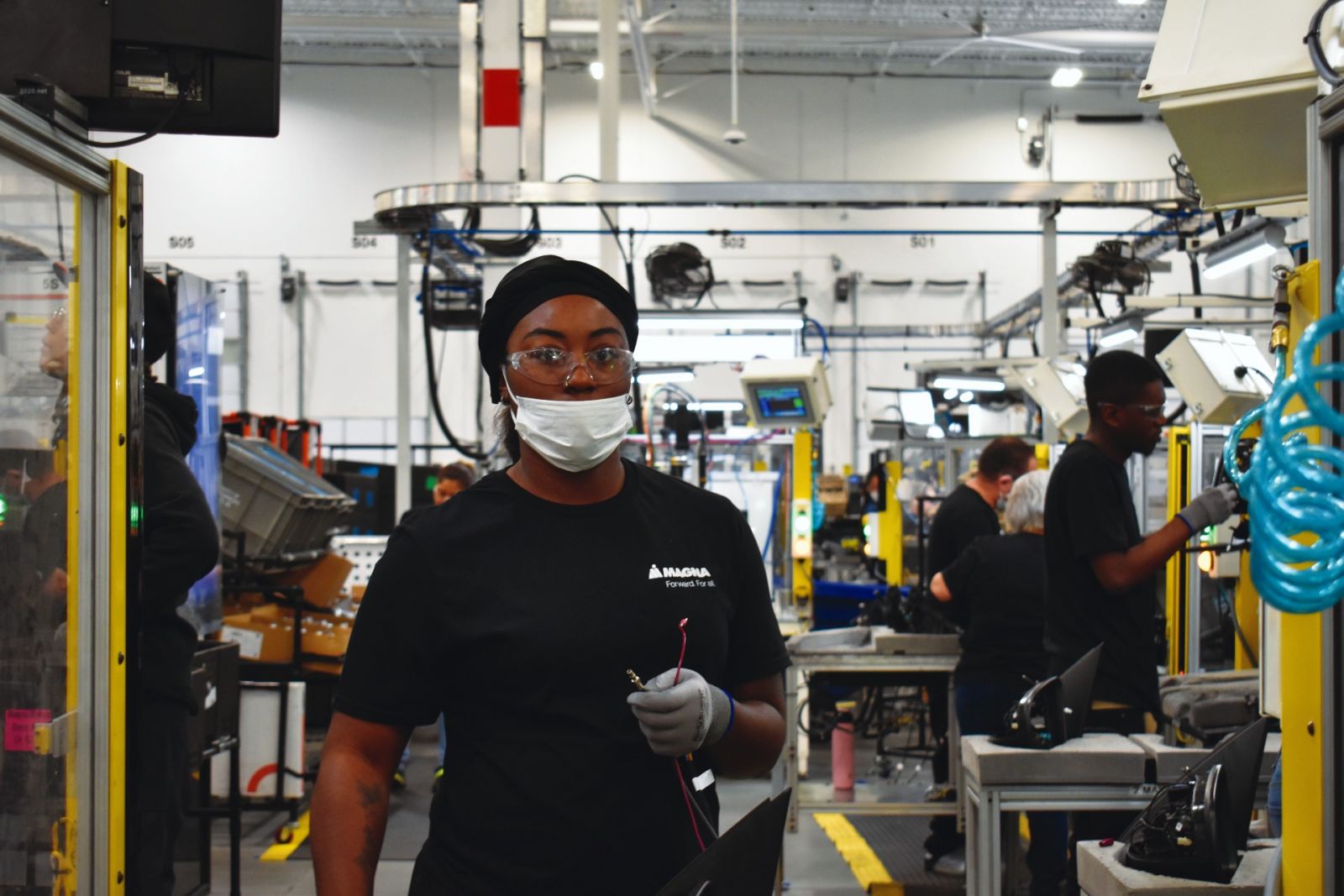 The new location features a number of amenities for the 150 to 400 new employees brought on through the expansion: a fitness room, vegetable garden, gaming lounge and solar-lit walking trail. According to Salvatore, regional employees made a heatmap of where Magna’s Spartanburg employees lived and then selected a location for the new facility as close as possible to the majority of employees.

“It was a very specific choice and it was more focused on the employees, not the customer,” he said. “We can ship an extra 10, 15 minutes away. It’s the same. We ship once a day, so at the end of the day, if it’s a little bit longer, it’s not a big deal.”

The architecture of the facility and the company’s workflow also lay the ground- work for future automation.

Crane rails were engineered into the ceiling to prepare for the future as Magna Mirror brings injection molding operations in-house around August, according to the company.

Narrow aisle warehousing design, while not ideal for heavy forklift traffic, can save space, streamline operations and leave room for additional automated systems.

The conventional aisle spacing, such as in the Canadian company’s previous facility, gravitates toward the 12-foot range. Narrow aisle design can space rows anywhere from 10 feet apart to, as seen in the Duncan warehouse, five feet apart, according to Jane Hennes, material manager at Magna Mirrors.

“The greenfield of this building really gave us an opportunity to make something very streamlined that required very little touching, and it’s very effective in its management,” she said. “We designed systems to make it as lean as possible.”

Every time a product is handled or “touched” in the warehouse, the higher inventory handling costs become greater the opportunity increases for Murphy’s Law to take over.

In the old building, the company had a warehouse that was about 11,000 square feet and housed 1,200 spots for a single deck pallet, according to Hennes.

The new facility has about 11,000 square feet too but with 1,800 spots for the single deck pallets.

“So it was a 50% increase just moving into this building even though we have the same footprint,” Hennes said. “You automatically, just by reducing your aisles obviously, get way more storage space.”

The narrow aisle design also eliminated an additional touch point for the team.

In the old warehouse space, parts came through the dock and were put into a “static storage area” before being taken down and moved to a more visible storage area where it is removed to the line.

With additional room created by the narrow aisle configuration, Magna’s warehouse staff are now able to bypass the static storage stage. All parts have a dedicated position in the warehouse and are put in their place once they come through the dock.

“There is no dynamic storage for our components,” Hennes said. And to prevent injury and prepare for future automation, all parts are moved by cart — none by hand.

“We wanted to not expand out of this footprint if we add in more business. So what we’ll do is build those racks this way into our own footprint, and we will gain another 50%,” she said, gesturing toward an empty expanse that will soon house plastic injection operations too. “So by the time we’re done, we’ll have 2,700 storage racks where originally we had 1,200.”