From 1996 to this spring, Sterett Hall Recreation Center on the former Navy base in North Charleston served as a place for arts, culture and community in an area devoid of many neighborhood assets.

The center was part of the Chicora-Cherokee community, which the Rev. Bill Stanfield describes as a mostly black neighborhood in which the majority of residents live on low to moderate incomes, crime is high and a big-box grocery store does not exist. Stanfield is CEO of the nonprofit Metanoia, which focuses on community-led development in the area. 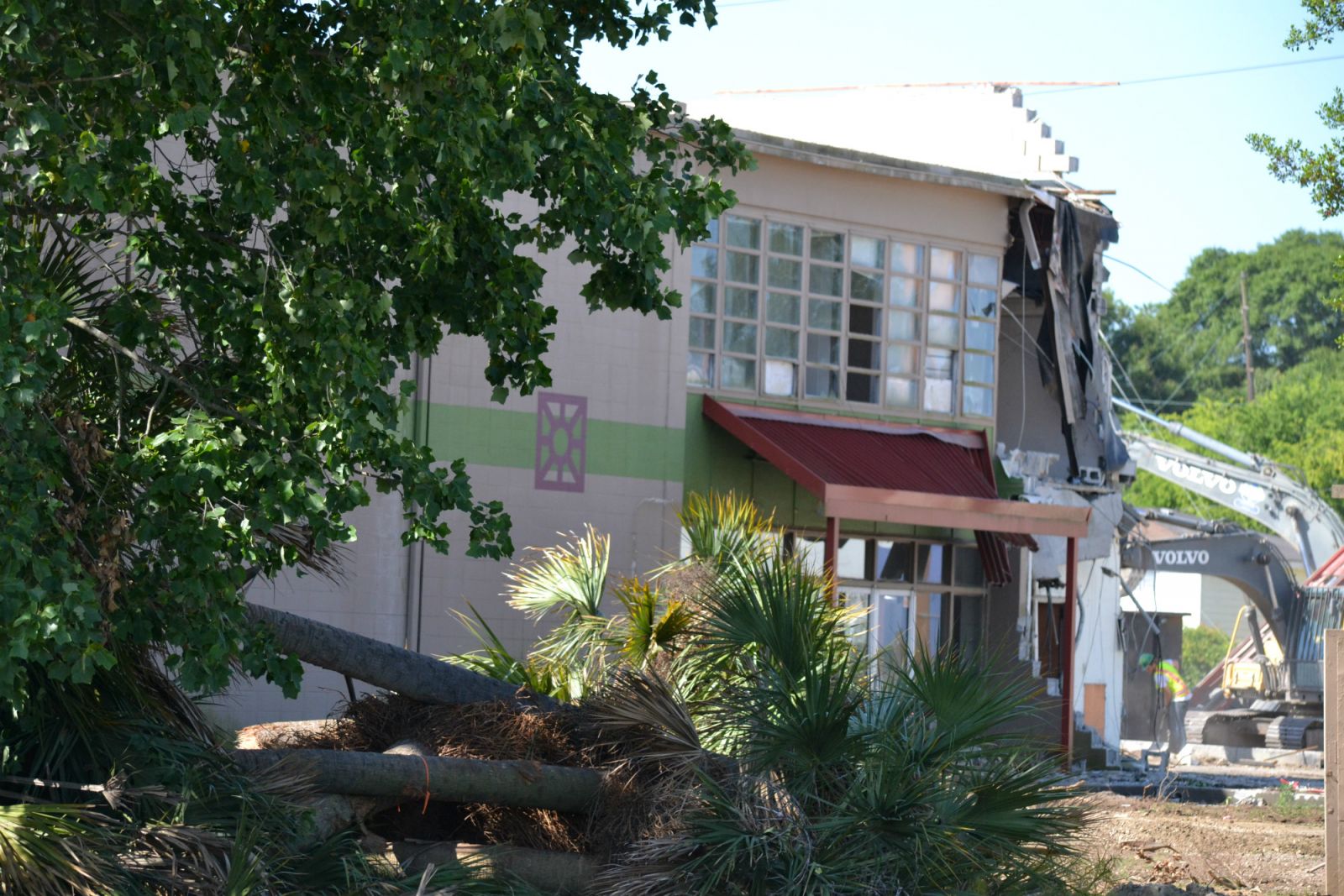 Now, demolition of the building is underway to make room for a planned cargo facility.

Palmetto Railways, an arm of the state Commerce Department, has been planning to build an Intermodal Container Transfer Facility at the former Navy base for several years. The cargo transfer site will support operations at the future Hugh K. Leatherman Sr. Terminal, which also sits within the old base about a mile away along the Cooper River.

Community leaders are calling for the state agency to commit more mitigation funding to specific needs. They want compensation for any losses or negative impacts on surrounding communities.

Stanfield, also a resident of Chicora-Cherokee, called Sterett Hall “a major cultural resource” and said specific funds should be set aside to build a new community center in North Charleston. The city has not committed to using its $8 million in mitigation funds for that purpose.

In addition to the flattening of Sterett Hall, 106 residences will be demolished as part of the state’s plans. Many of those residents are elderly or have low incomes and will struggle to find affordable housing in their neighborhoods, community leaders said. All of those residents will be compensated for the loss of their homes, permit documents show.

Stanfield said the loss of housing “will have a major impact on neighborhoods already overburdened by the construction of this facility.” He said he wants Palmetto Railways to establish a fund for affordable housing initiatives in the Chicora-Cherokee neighborhood.

The Army Corps of Engineers, Charleston District, is currently considering whether to grant Palmetto Railways a permit it needs to begin construction of the facility on state-owned land.

The permit is required by the National Environmental Policy Act because construction on the project will fill about 12 acres of wetlands, according to Lt. Col. Matthew Luzzatto, the corps’ commander and district engineer.

When considering whether to approve a permit, the Army Corps examines any adverse impacts a project might have on the community — businesses, residents, traffic, air quality, water quality, the environment and overall quality of life for surrounding areas.

Army Corps officials have been meeting with project planners and the public on the proposed plans since 2013. Palmetto Railways revised the plans in the fall, necessitating more public input.

At its most recent meeting in late May in North Charleston, 27 people spoke about the project. Six people were in favor of it, and 21 people said that they understand the need for the project, but that they have serious concerns about how it might harm the surrounding area.

That input, as well as any written comments received by July 9, will be taken into consideration by the corps when reviewing the draft environmental impact statement.

The corps will then release a final environmental impact statement, followed by a record of decision — the agency’s official verdict on the permit. In addition to denying or approving, the corps can approve the permit with conditions.

In the draft statement, the corps said the project will make “a disproportionately high and adverse impact to low-income or minority populations in the Chicora-Cherokee neighborhood.”

Jessie White, an attorney with the S.C. Environmental Law Project, said the next step needs to include a specific plan to mitigate these impacts.

“These are precisely the kind of impacts that NEPA (National Environmental Policy Act) was designed to mitigate for, yet the community is being asked to bear a significant burden without any assurance that that’s going to happen,” White said.

Palmetto Railways’ 130-acre cargo transfer site would provide rail and road connections to the future Leatherman terminal. Site preparation work is underway at the marine terminal, and the S.C. State Ports Authority expects phase one to open in 2019.

If the Intermodal Container Transfer Facility gets permitted, it is set to open in 2018. Norfolk Southern Railway and CSX will serve the site. Containers will be unloaded from trains and trucked on a private road to the new terminal. That process will be reversed for inbound cargo.

State officials said the intermodal facility is needed to meet anticipated cargo demand as manufacturers expand in the state and the harbor prepares to be deepened to 52 feet.

“Moving containers by intermodal rail is an attractive proposition to the Class I railroads today as intermodal is becoming their major business segment,” said Jim Newsome, president and CEO of the ports authority, who noted that 12% of cargo moved by intermodal rail in 2009 compared with 25% today. “Containerized rail is good for the region and state. It removes trucks from the roads and is the most environmentally friendly method of domestic container freight movement.”

For the cargo facility to open, 42 acres of road and rail improvements or rerouting will need to occur, Luzzatto said. Palmetto wants to reroute several rail lines by building two new connections to the existing rail network, giving CSX access to the container yard from the south and Norfolk Southern access from the north.

Under the new proposal, a new southern track connection that extends one mile south of the rail yard would connect to an out-of-service CSX right of way near the intersection of Meeting and Milford streets, providing CSX southern access.

Additionally, the original route along Spruill Avenue would be replaced by a northern track that would run through the former Navy base. A new railroad bridge would be built across Noisette Creek to give Norfolk Southern northern access to the cargo site.

While more industry moves into the area as part of its rebound after the Navy base closed in 1996, community leaders want to ensure development does not hurt residents’ home values or their quality of life.

Residents in the area are concerned about noise, vibrations, lights and pollution from the trains, as well as more congestion on area roads, the loss of community assets and a devaluation of properties that sit 100 feet from the proposed rail lines.

Palmetto Railways has discussed using high mast lights that point downward to lessen brightness near homes and quieter electric cranes to minimize noise, as well as creating a bike and pedestrian path in the area.

To compensate for having trains near residences, Omar Muhammad, president of the Lowcountry Alliance for Model Communities, said he wants a tax increment financing district to be created to protect vulnerable populations and quiet zones — where trains cannot blow their horns — to be established.

Muhammad also wants Palmetto Railways to establish endowments to fund scholarships and programs for literacy and at-risk youth, which could focus on sports, mentorships and GED programs.

As part of the mitigation plan, Muhammad advocated for an expanded buffer, with more trees and plants, along the rail line to help block out noise and pollution. He wants to see the berm extended through Chicora-Cherokee, to at least North Carolina Avenue, and a new greenway along the berm to provide a recreational asset for the community.

North Charleston resident Rick Harden said he is worried the estimated 100 jobs that will be created by the project will not offset the negative impacts the project will have on the surrounding neighborhoods.

“The greatest need of the neighborhoods that we live in is permanent employment,” said Harden, who called on Palmetto Railways to help with workforce development in the area.

Environmental and neighborhood issues that could stem from the trains — noise, fumes, air quality and vibrations — are top of mind for Gerard Mickell, the president of Union Heights Community Council. Mickell said he is hopeful, but cautious.

“This current effort appears to be a chance for a rare economic upswing in this area,” Mickell said. “Our hope is that history does not repeat itself by ushering in a bad environment with the anticipated good jobs. ... We welcome all clean, quiet, unobtrusive industry to our neighborhood. Please be reminded that this is our neighborhood by working to be good neighbors.”