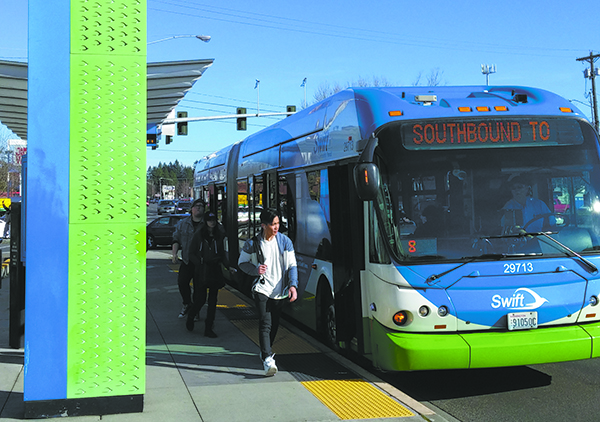 The proposed mass transit solution to Interstate 26 congestion got a boost from the tax increase passed in November, and project leaders are preparing to begin the process they hope will end in a federal grant and a new way of commuting across the Lowcountry.

The bus rapid transit project, which would run from Summerville to downtown Charleston on U.S. Highway 52 and U.S. Highway 78, received $250 million from Charleston County’s half-cent sales tax increase. Some of this money will go to construction of the transit line, according to Sharon Hollis, principal planner at the Berkeley-Charleston-Dorchester Council of Governments and project leader for the bus rapid transit project. Other money will be set aside for operational costs when the BRT line starts.

The bus rapid transit project is projected to cost $360 million to construct, which the COG hopes will be 50% to 60% funded by a Capital Investment Grant from the Federal Transit Administration. Hollis said the grant program is competitive, but “there’s a lot of opportunity for money on the table if you can compete for it.”

No extensions are permitted because of how competitive the grant is.

The project development stage consists mainly an environmental analysis and varies in complexity depending on the project. Hollis said the COG is working with the FTA to determine which kind of analysis is needed for the bus rapid transit project.

After the environmental analysis, the COG enters the engineering process, which includes figuring out exactly where bus stations will be.

“A lot of this was a planning-level study, so we put a dot on a map but we didn’t say, ‘OK, this is exactly where the station is going to be, this is going to work,’” Hollis said. “So we have to go through the engineering piece, as well as go through a series of FTA measures.”

Those measures include making sure a project has matching local funding, which the sales tax increase provides, and looking at how the current mass transit system is being run.

“For example, CARTA has one of the oldest systems in America for a fleet its size,” Hollis said of the Charleston Area Regional Transportation Authority. “So one of the things they’re going to look at is are you in the process of updating that fleet; are you keeping your current fleet or your current system; are you managing those resources — before they give you money for a brand-new system.”

The bus rapid transit project also has to meet certain performance metrics: The cost per trip must be less than $10; a certain number of cars must be taken off the road by the transit system; and the system must make 5 million or more trips a year for commuters and traditionally disadvantaged households.

“For example, if this route was going to an area where everybody had five cars, it wouldn’t rate as highly as one where a lot of the community didn’t,” Hollis said.

The bus rapid transit line, as currently proposed, would include 16 hybrid-electric vehicles operating in a guideway that would run from Summerville to downtown Charleston, with 18 stops along the way. It would take a bus 60 minutes to travel end to end, with a bus coming to each stop every 10 minutes during peak riding hours and every 20 minutes in off-hours.

Hollis said the FTA also looks at the environmental benefits of the project — which is one of the reasons hybrid buses are being proposed instead of diesel — and population and employment densities of proposed station locations.

“It’s very competitive,” Hollis said, adding, “there’s a lot more requests for funding in this program than there is actually funding.” 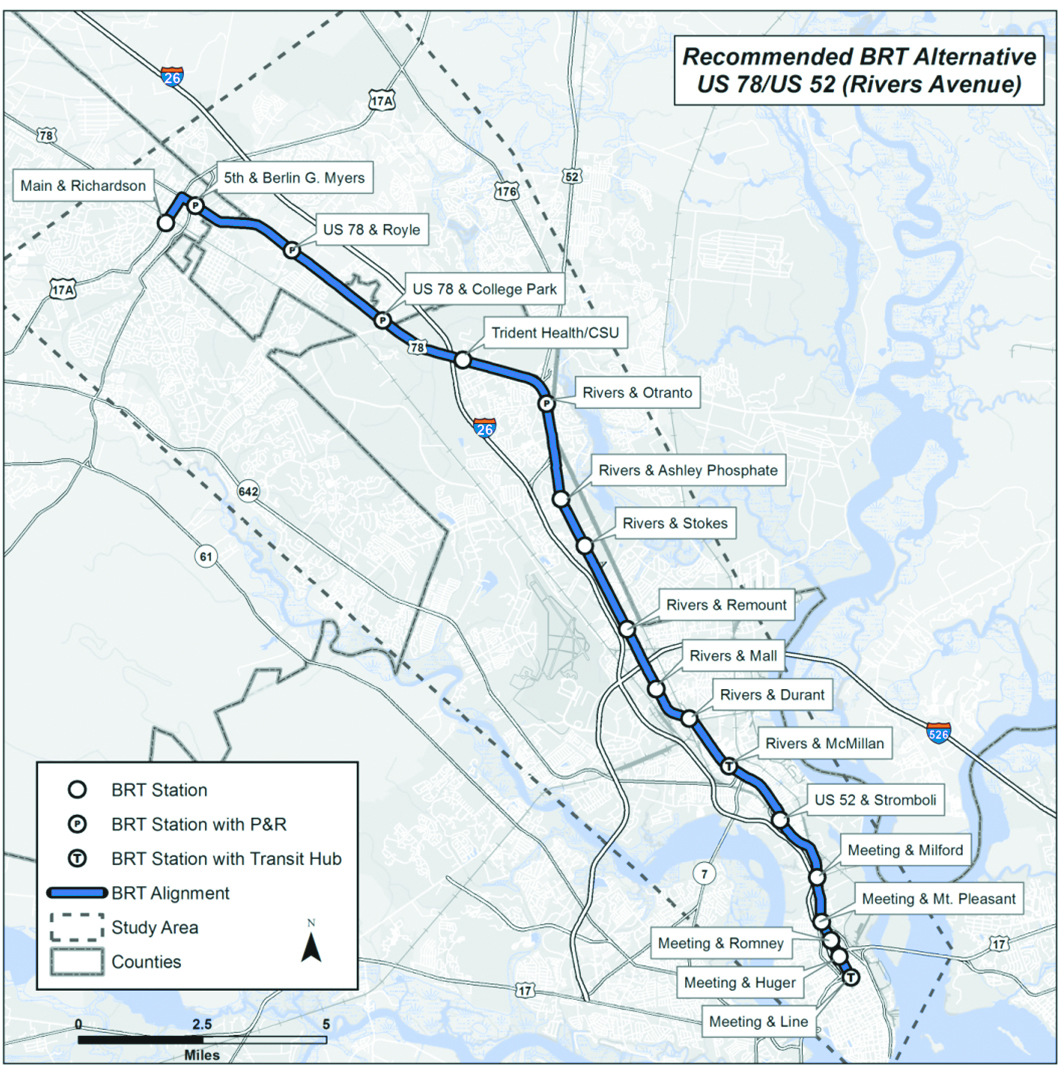 After the COG completes the project development, the FTA rates the project and compares it to other grant applicants. If the project moves on, the COG then moves into the engineering process, which is where full funding is determined and complete plans for the project are laid out.

After that, the FTA rates the project again, and “at that point — hopefully by then — the president puts you in his budget and they’ll give you instruction,” Hollis said.

She said there is the risk that the FTA won’t give them the grant.

“If that were the case, we would pursue other grant opportunities or find other types of funding sources, whatever that would be,” she said. “We’ll cross that bridge when we come to it.”

Hollis said if everything goes according to plan, though, the bus rapid transit line is scheduled to break ground in 2022 or 2023 and open in 2025.

The annual operating cost of bus rapid transit is expected to be $5.9 million, which would come from the same sources CARTA currently uses: about 45% local funding from Charleston County and Charleston, about 5% state funds, about 30% federal assistance and about 20% revenue from fares.

The bus rapid transit project is part of the COG’s Long-Range Transportation Plan, a regional transit framework that will map out transit projects for the next 25 years. The plan includes roads; bridges; mass transit; and bicycle, pedestrian and service routes. It’s required by federal law in order to receive federal funding for transportation.

Steve Dudash, Charleston regional director at the engineering consulting firm of Thomas & Hutton, is the chairman of the CARTA/Bus Rapid Transit Advocacy Committee, which brings the private sector into the conversation.

“Everybody thinks ‘mass transit’ and ‘public,’ it’s all public. But what we need ultimately is probably a public-private partnership,” he said. That partnership could look like a business purchasing a vehicle, donating land to the project or contributing to a transit hub in a neighborhood to make bus rapid transit more accessible.

He said one of the biggest challenges to getting people on board with BRT is the mentality around mass transit in the Charleston area. People associate mass transit with CARTA, which people think of as “stinky, diesel buses that’re going around town that aren’t efficient, aren’t on schedule, they’re not reliable,” Dudash said.

Once people get past that, though, and see that bus rapid transit can look more modern and will be hybrid electric vehicles, Dudash said business leaders have been “very excited.”

Dudash said not many people have stepped up to donate money yet, but he said the advocacy committee is working to find ways for the private sector to assist the BRT project.

“Anytime we talk about it, everybody realizes the benefit and what it can do for the community,” he said.