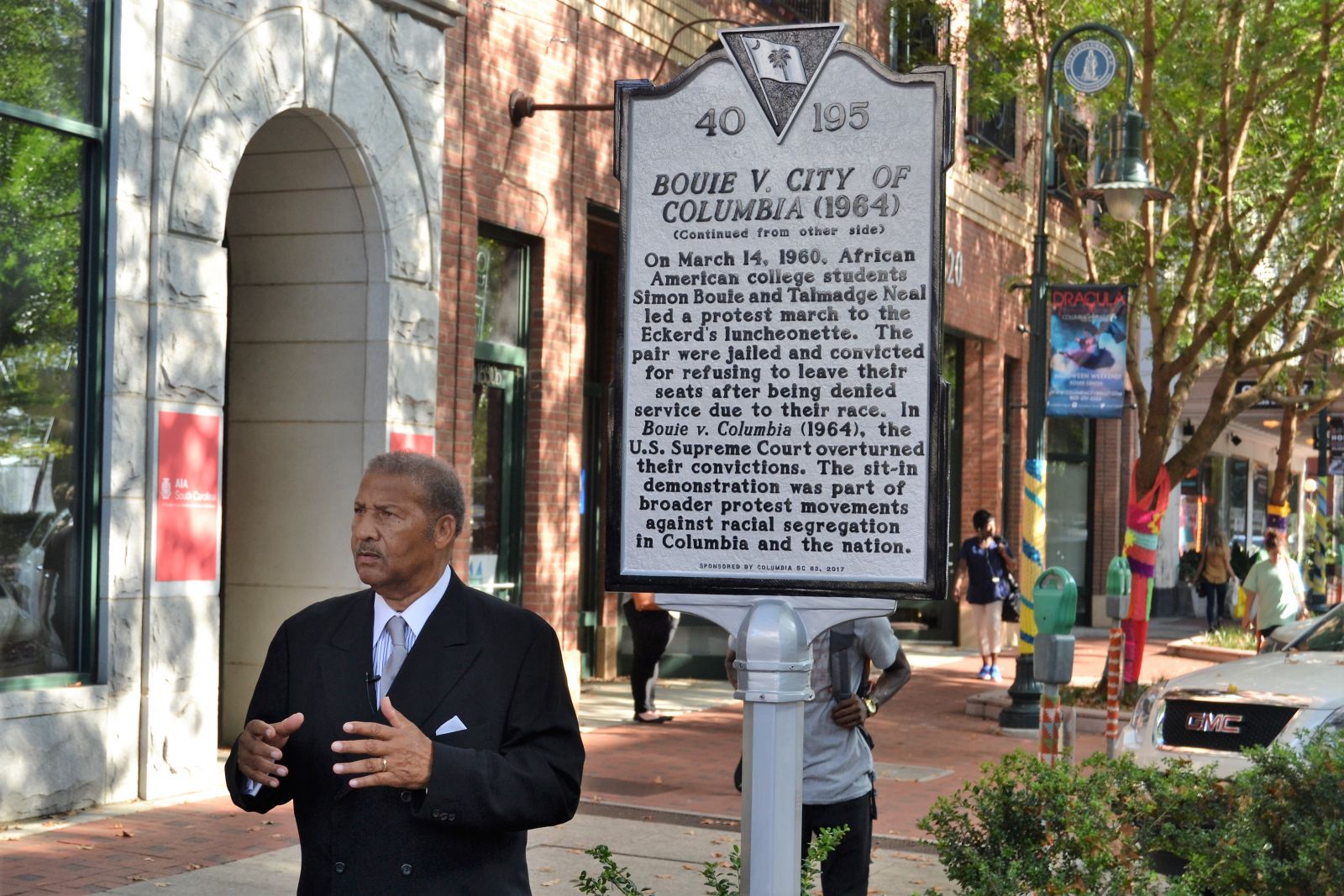 A million things ran through Simon Bouie’s mind as he sat at the Eckerd’s lunch counter on March 14, 1960.

He kept coming back to one thought: His parents, who had admonished him to stay out of the civil rights unrest manifesting in marches and protests in downtown Columbia, probably weren’t going to like this.

Bouie, then a student at Allen University, and his friend, Benedict College student Talmadge Neal, were arrested, jailed and convicted for refusing to leave that lunch counter, where they were denied service because they are black.

Fifty-seven years later, Bouie stood in that same building — now the state chapter of the American Institute of Architects — at 1530 Main St. A historical marker detailing his story, which became the basis for the landmark 1964 civil rights case Bouie v. City of Columbia, gleamed outside in the October sunshine.

“When they asked me to come in, I said, ‘I’m not going in there. I’m not going to be arrested again,’” Bouie joked.

Turning serious, Bouie remembered the mix of emotions as he and his friend kept their seats.

“We had so much going through our heads,” he said. “We were going up against the power structure, and you had policemen out there. You had the school officials, and you had those who participated in the march. You just had so many things going on. We didn’t know which way to turn. But we were fighting for a just cause, and we held to that till the end.” 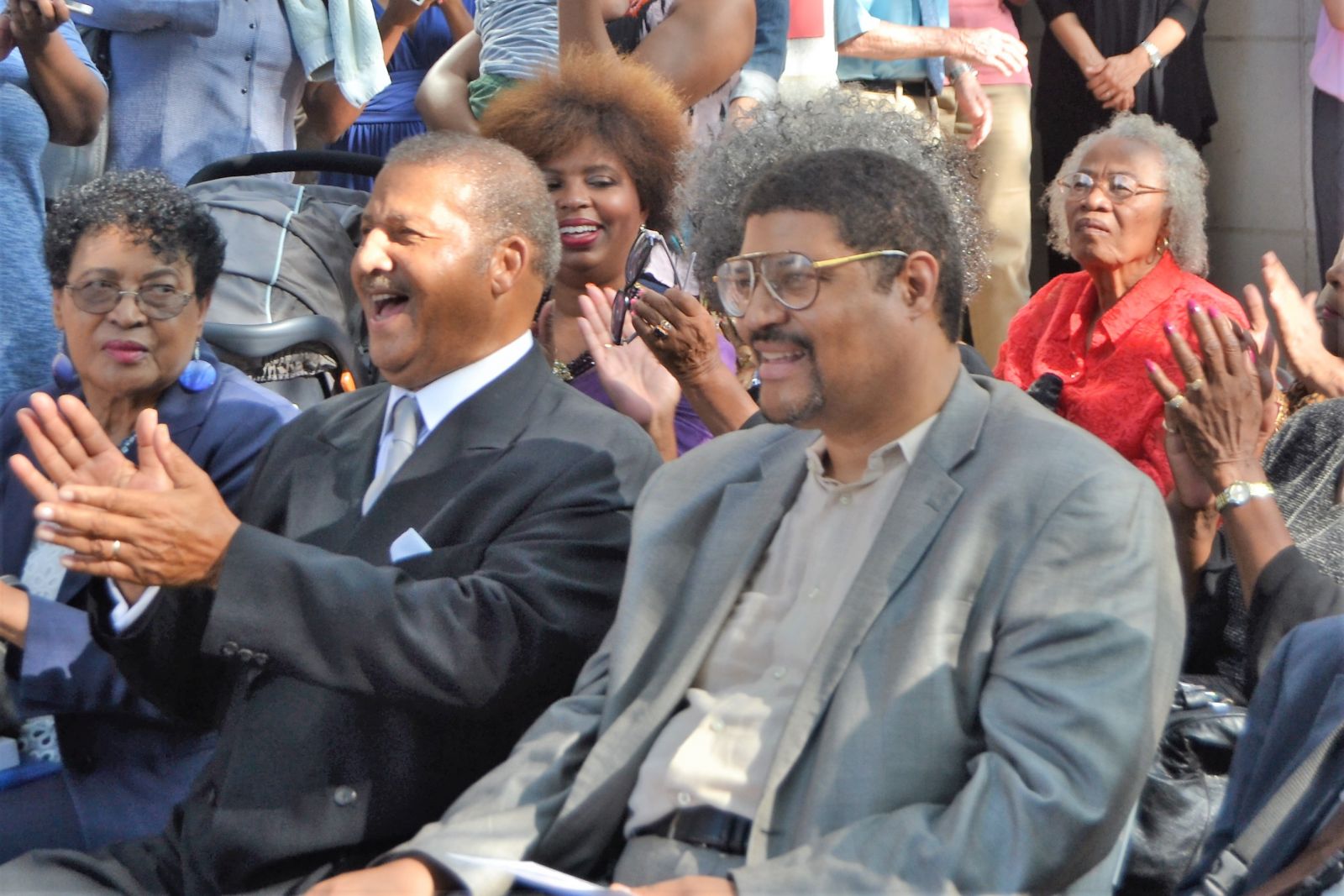 Earlier this month, Columbia unveiled two historical markers — on Main Street and at 1520 Taylor St. — to commemorate the groundbreaking resolve of Bouie and his fellow activists.

Those arrests became the basis for Barr v. City of Columbia.

In both cases, the U.S. Supreme Court overturned the students’ convictions, saying their right to due process under the 14th Amendment had been violated. Ten days after the Barr opinion, on June 22, 1964, the passage of the Civil Rights Act of 1964 outlawed racial segregation in public facilities.

Both Columbia cases are now taught in law schools across the nation.

The University of South Carolina Center for Civil Rights History and Research and Columbia SC 63, an initiative dedicated to commemorating Columbia’s civil rights history, spent five years researching the information engraved on the markers, said Bobby Donaldson, a USC history professor and director of both organizations.

“We knew there were important cases in Columbia. We didn’t know who the people were. We didn’t really know the details of what occurred in these places,” Donaldson said. “Part of our project was to capture the memories and the voice of the men and women who were young activists in 1960.

“These markers are permanent structures that will remind people as they travel down Main Street what this world was like 60 years ago, and of the people who worked to change it.”

Columbia resident Barbara Jones attended the ceremonies accompanying the markers’ unveiling to honor her friend, Milton Greene. Greene was one of the first people she met when she moved to Columbia in 1970, Jones said. They had young daughters the same age, and she and her husband were regulars at the pinochle group Greene hosted.

“He was an absolutely brilliant man, a wonderful writer,” Jones said. “His wife always said that if Milton and I were sitting over in a corner talking about a book or something, she just ignored us.”

While an avid historian, Greene “didn’t take any glory in saying, ‘We were involved in the sit-in downtown,’” Jones said. “He did things to help people, and not for fame and glory.”

As the crowd filed away and TV crews packed up cameras, Bouie replaced his memories of a long-ago lunch counter with ones of welcoming handshakes.

“It’s a very encouraging day for me,” Bouie said. “From where we’ve come from to this point ... When we were sitting in here, we had no idea that 50-some years later, we would be standing in this spot.”

This story first appeared in the Oct. 23, 2017, print edition of the Columbia Regional Business Report.