The city of Cayce’s new water tank has won the people’s choice award in an annual contest sponsored by coatings manufacturer Tnemec.

Cayce’s water tank, only a few months old, received more than 7,600 votes to emerge victorious from 270 entries throughout the U.S. and Canada. The vote total was the highest in the history of the contest, which has been held since 2006, according to a news release. 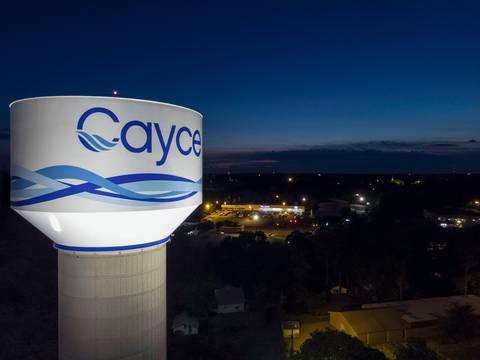 The water tank is now in the running for Tnemec’s 2019 tank of the year and will be featured in the company’s 2019 calendar.

Cayce’s 144-foot tank holds one million gallons of water and took 18 months to complete. It was designed by Cayce-based American Engineering Consultants. Joe Long of Black Barn Brand Design created the new city logo that appears on the tank.

“Our city is blossoming with creativity and we wanted everyone to provide their input for our branding campaign,” Partin said. “We narrowed down all of the amazing ideas from our citizens and businesses and came up with 17 potential tag lines for our new logo. It was important to capture all that Cayce has to offer yet still emphasize the hometown feeling of our community.”