Local farmer getting back to her roots through incubator program 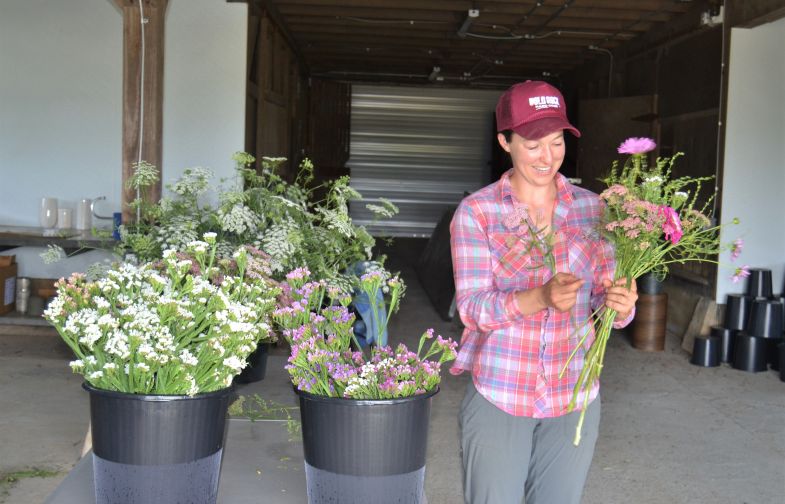 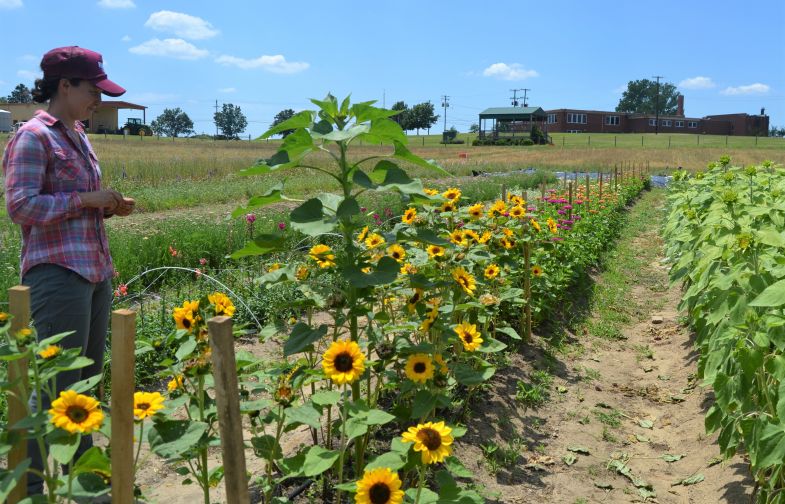 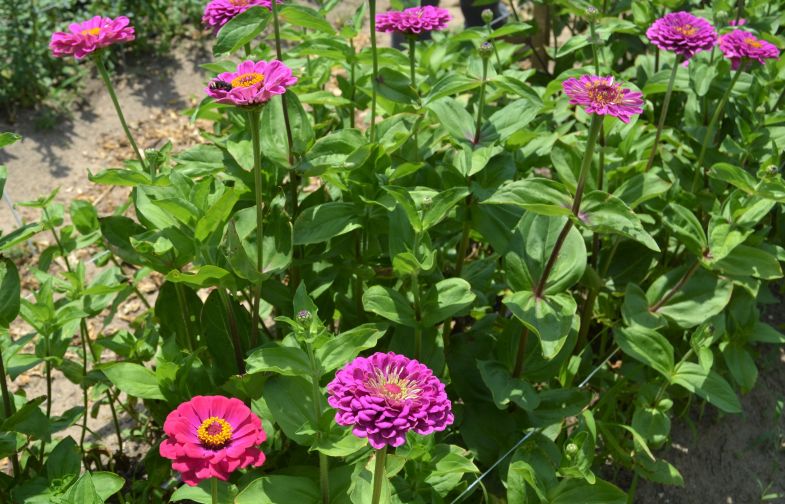 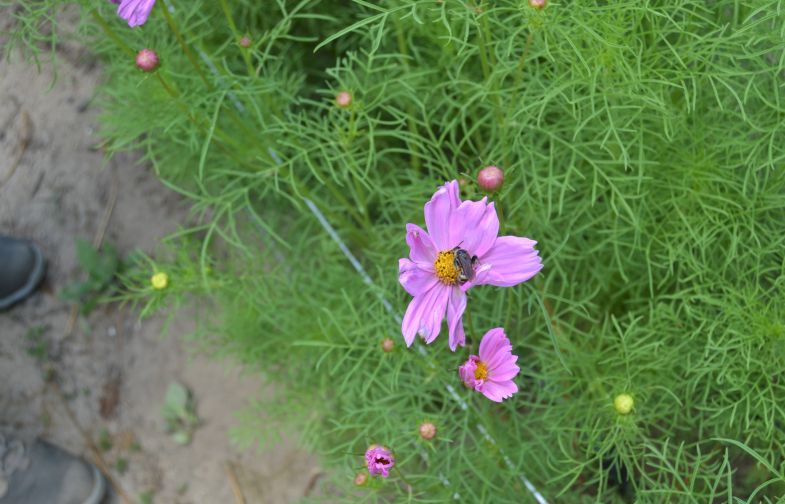 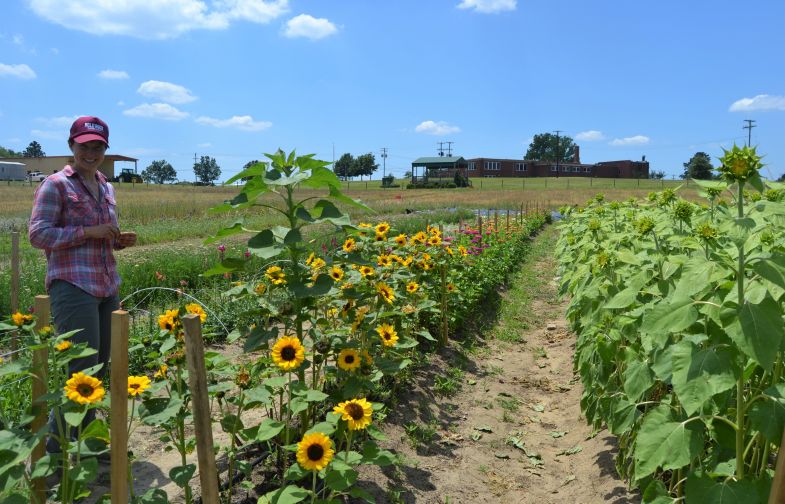 Brinton Fox stands amid rows of sunflowers on her 3-acre plot. (Photo/Melinda Waldrop) 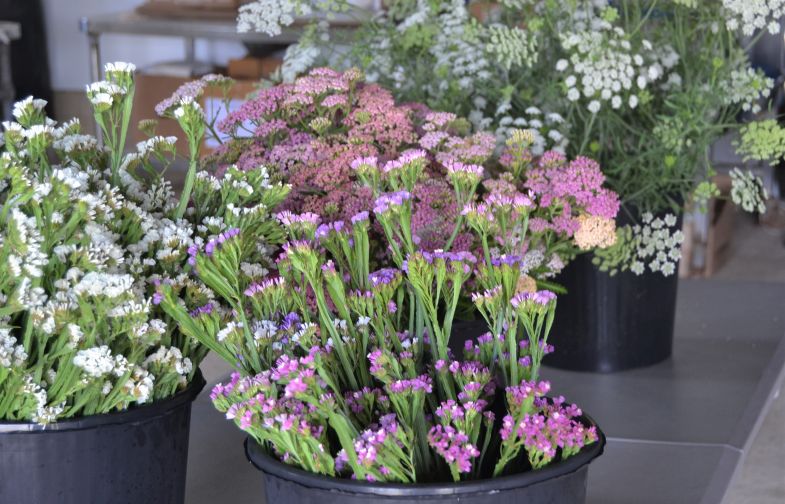 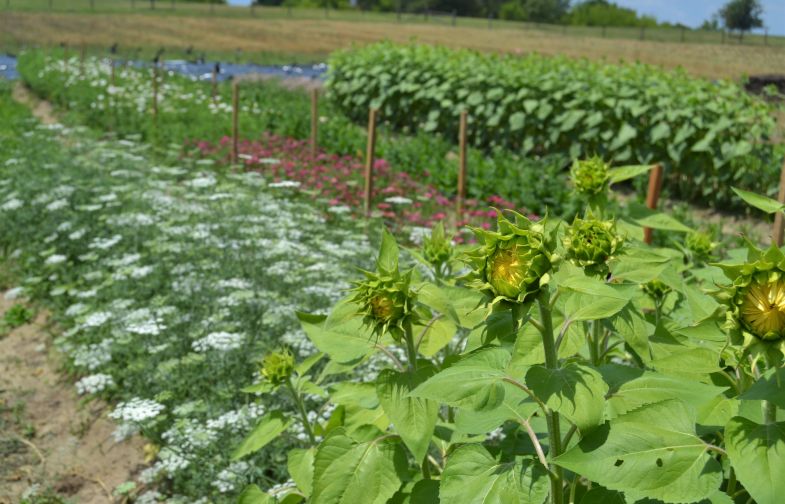 Brinton Fox grows a variety of flowers at her 3-acre plot at Sandhill Research and Education Center. (Photo/Melinda Waldrop)

Dirt is in Brinton Fox’s blood.

Fox, 28, grew up on an organic herb farm in Chapin run by her mother, Bettye Boone. While she enjoyed piddling around the greenhouse and stirring the compost piles, Fox planned to be a lawyer until her career path forked at Clemson University.

Now, Fox is part of an upstart farm incubator program at Clemson’s Sandhill Research and Education Center, getting her cut-flower business, Boone Fox Farm, off the ground with the eventual goal of owning her own farm. 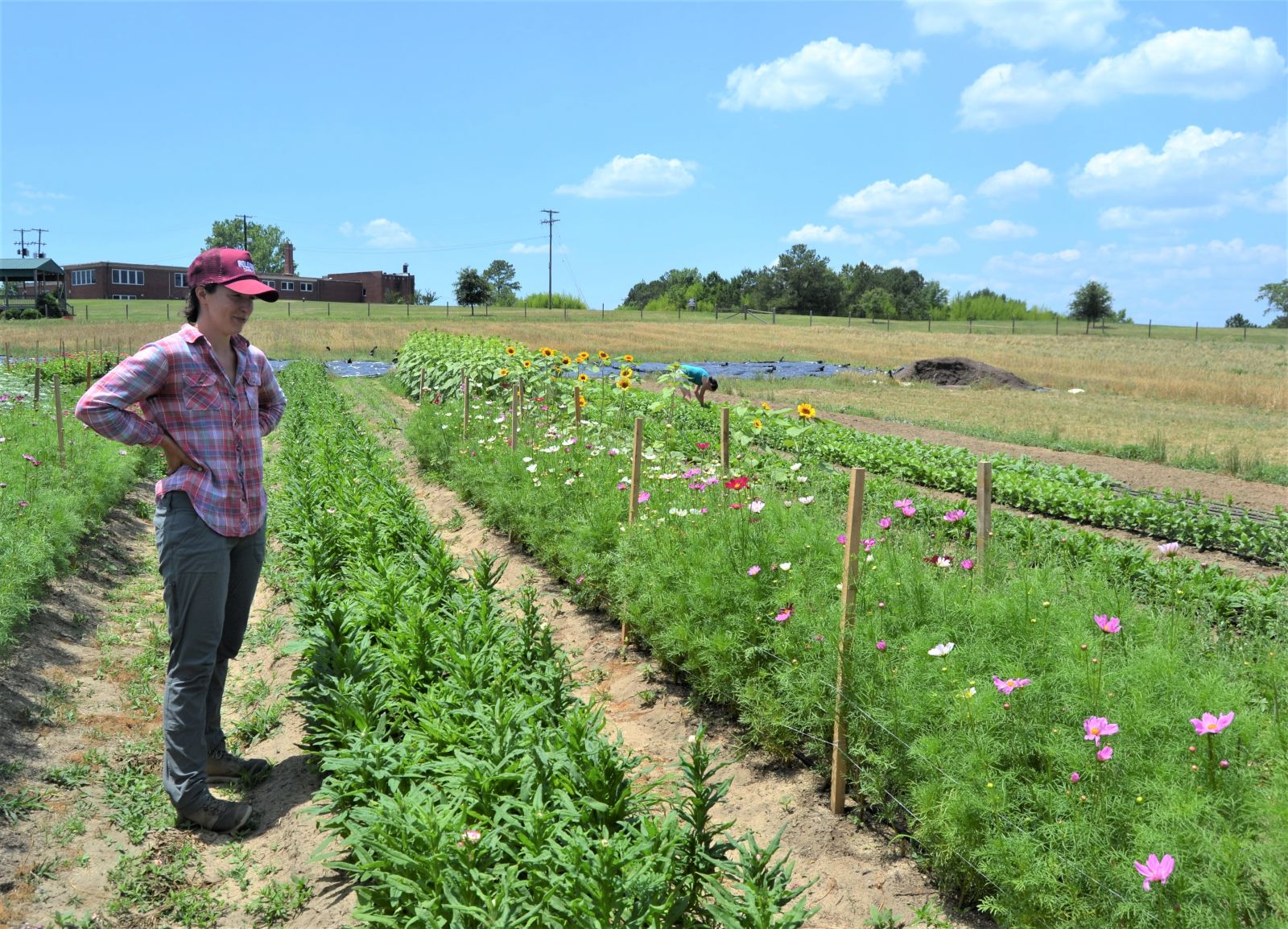 The incubator program, conceptualized in 2015 and in its first year of production, provides small plots to startup farmers to help improve profitability for new entrants into South Carolina’s $41 billion agribusiness industry. Participants receive farming advice from Clemson Cooperative Extension agricultural experts and on-site farm manager Cody Bishop, as well instruction in business planning and food safety. They also have access to farming equipment and facilities including a greenhouse and a walk-in cooler.

“You get some folks interested and they become business entrepreneurs, and you help the economy,” said Kathy Coleman, director of public service activities at the Sandhill center. “That’s our goal, to improve the ag economy, (and) it’s part of Clemson’s public service land grant mission. Clemson does it a lot in the automotive and aerospace sectors, so why not the ag sector?”

Each farmer leases land for three years, after which Clemson helps them find farmland to purchase or lease.

“There’s a lot of risk involved, and this to some extent minimizes some of the risk upfront for them,” Coleman said. “It all sounds good — ‘Yeah, I’m going to go grow half an acre of squash,’ but that’s not necessarily the easiest thing to do, especially organically.”

“By the end of the season, I will have mixed 30 cubic yards of compost and carried it into my fields — by wheelbarrow,” Fox said. “It’s a way to tangibly do something about protecting the environment and trying to grow something in a way that helps other things survive.”

A fork in the soil

Fox aimed to channel the agrarian interests nurtured by her childhood into a career in environmental law, graduating in 2012 from Clemson’s philosophy of law program. But by the time she got a part-time job her senior year at a student-run campus organic farm, she was contemplating hoeing a different row.

“While I was applying to law schools, I decided I didn’t want to go,” she said. “I was just tired of being inside and writing papers all the time.”

Fox spent another year working full-time at the campus farm before serving as an apprentice at a family farm in Asheville. There, with an operation heavily focused on flowers and totally dependent on income generated from crop production and sales, Fox’s career choice was cemented.

“If I didn’t really love it, I think that internship would have shown me: This is really hard,” she said. “And it did show me that, but it also showed me that I enjoyed the type of life that they had and how much they enjoyed being able to create their own business around their ideals. It was eye-opening to me, but it did not turn me away from it.”

After a stint as the assistant manager of a community farm in Atlanta, Fox returned to the Midlands to work a farm-to-school program in Lexington-Richland School District 5. From there, she spearheaded a cut-flower operation at City Roots Farm.

Two years into that role, Fox’s thoughts of starting her own farm ripened, leading her to reach out to the Clemson Extension Service. That move produced a half-acre plot, alive with blooming zinnias and buzzing bumblebees on a recent spring afternoon.

“We want it to be a real-world experience, where they’ve got to keep up with their costs,” said Coleman, who said Clemson subsidizes some expenses along with providing basic infrastructure. “Cody’s worked with them on making sure they know how to do soil tests and operate equipment. All of it’s a learning experience.”

Fox is one of two participants in the first year of the program, Bishop said. A third is close to beginning work, and there is space for three more this year, with time remaining to get late summer or fall vegetables in the ground, he said.

“On a half-acre, it’s kind of finding your niche market that you’re wanting to target and making sure that, when you do produce a product or you do set your plans in motion, that you already have it sold before you grow it,” Bishop said.

Fox is busily doing just that, marketing her flowers to area florists while also overseeing a robust bouquet-sharing program that provides weekly arrangements of seasonal blossoms for an upfront fee. She also presides over the occasional pop-up market at Devine Street bar Craft and Draft, where she bartends part-time.

That’s where she met bouquet share customer Nan Hart Weaver, who kept up-to-date on the progress of Fox’s farm.

“When I found out that Boone Fox Farm was doing a bouquet share, I had to be a part,” Weaver said. “What a wonderful opportunity to support small business and reap the rewards by getting fresh bouquets every week for eight weeks. The bouquets so far have been exquisite.” 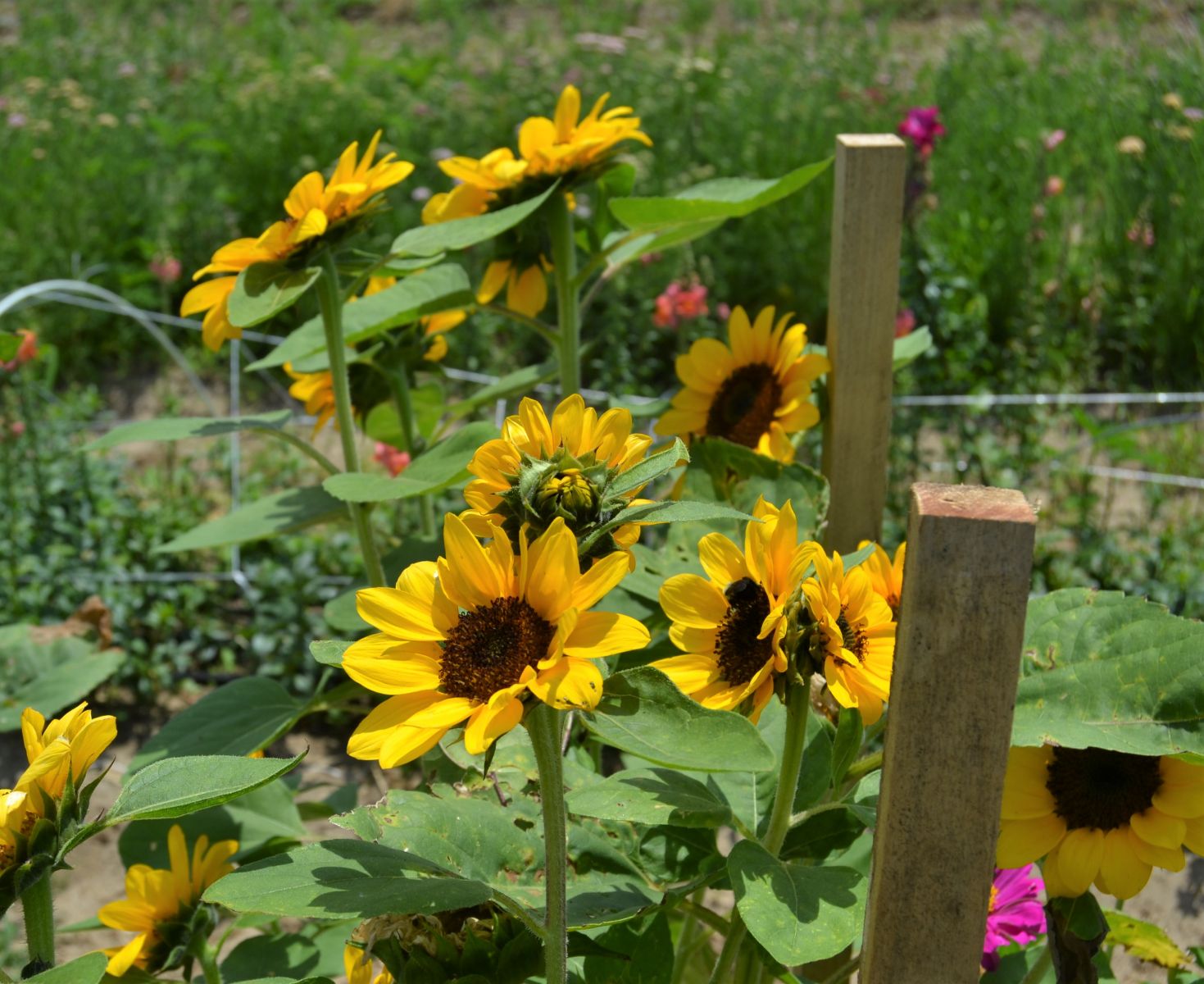 Along with a love of farming, Fox learned multi-tasking from her mom, who also taught Advanced Placement history and worked in disability law with a Columbia firm. Fox channels that inherited work ethic into a demanding schedule that began last fall.

“Mother’s Day flowers were planted in November,” Fox said. “The production starts in the fall for spring, and winter for summer. Fall crops will go into ground in June and July. When the first round is blooming, two more rounds are in the ground.”

Fox picks crops partly based on what will tolerate Columbia’s heat and sandy soil. While her spring routine consists of watering heavily using a drip irrigation line once a week, that will increase to three times a week during the summer, when her weekly or twice-a-week harvesting schedule will slow down.

“I will not be harvesting a lot in July in August. It’s far too hot, people are on vacation, there’s no wedding industry,” she said. “My main season is April, May, June, and then September, October and November.”

Fox eventually hopes to farm organic vegetables as well, but that “would require another acre, at least,” she said. “For this property, it was just more practical to focus on growing my flower business before I started adding on other products, (and) it taps into more of my creative side.”

Fox’s fields and bouquets recently featured zinnias, cosmos, yarrow and ammi majus. Zinnias and cosmos are “cut-and-come-again” varieties which produce several harvests a week, while yarrow, a perennial that can handle both heat and cold, produces four to five weeks of harvest. Ammi, a Queen Anne’s lace variety, produces a four-week harvest.

Fox, who has help from a volunteer, would like to hire a full-time employee within the next year as she continues to build her florist connections.

While she’s returned to her farming roots, Fox’s law experience has also produced dividends, such as the money she saves on a CPA by doing her own taxes. In the soil she grew up playing in, she’s found a winning combination of both career paths.

“The interest was there. I just didn’t know how to focus it,” Fox said. “Especially communicating with people that were in the same (law) program with me about what their life has been like the past seven years … I definitely am happy with the choice I made.”