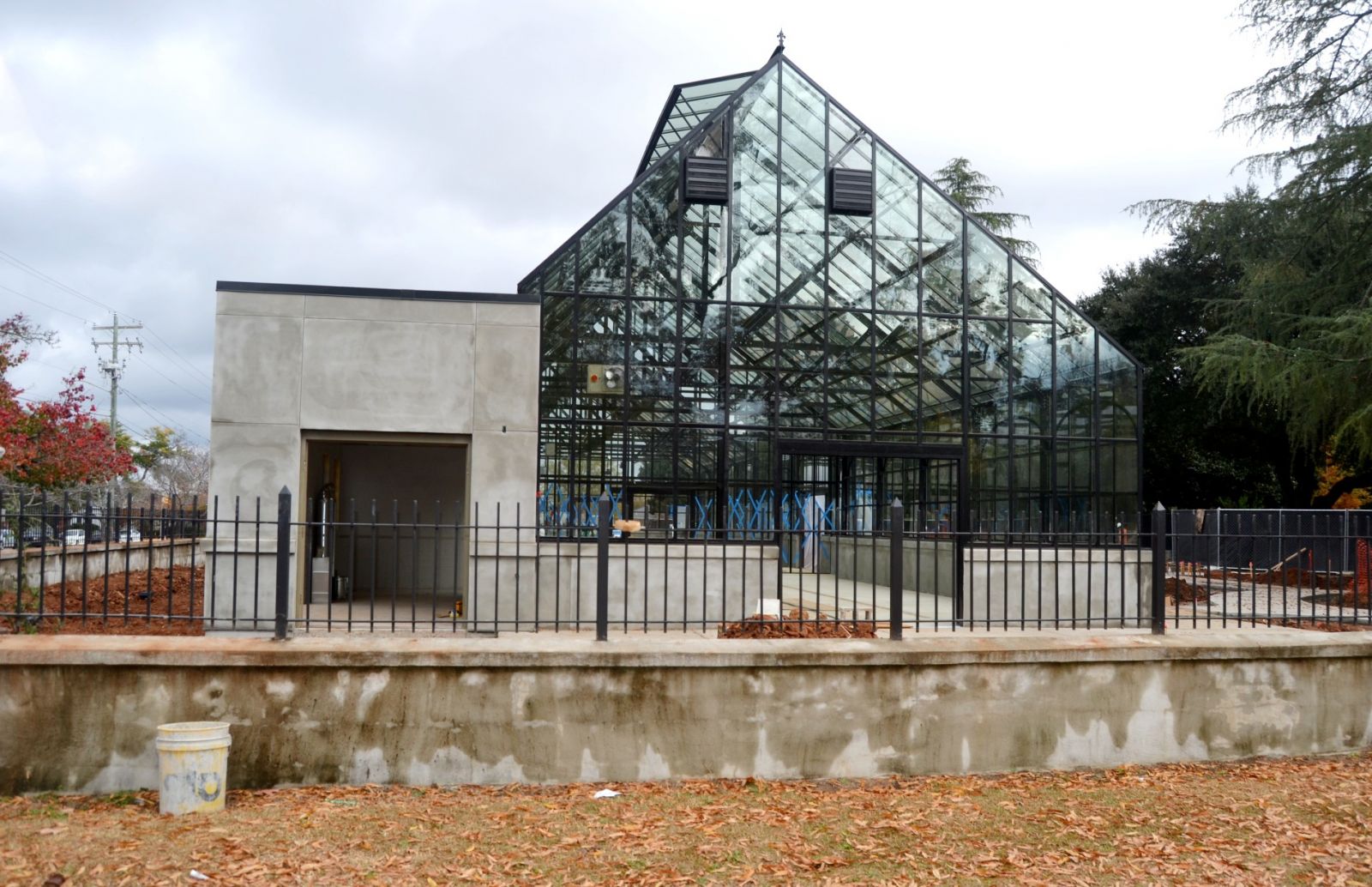 One of Historic Columbia’s missions is to provide a thoughtful interpretation of area history, and its latest project is designed to get to the root of things.

At the northwest corner of the Hampton-Preston Mansion and Gardens on Pickens and Laurel streets, the Boyd Foundation Horticultural Center is taking shape. Designed by Lambert Architecture + Construction Services with Cohn Construction Services serving as general contractor, the project will feature a state-of-the-art greenhouse where plants as historically accurate as possible to the mansion, built in 1818, will be propagated. The center will also feature interpretative programming and serve as a base for horticultural research.

“It’s really going to enhance the grounds department here as far as capabilities on the production end of things, but also on the interpretative end of things,” said Keith Mearns, director of grounds for Historic Columbia. “Previous to this project, the very back part of the Hampton-Preston property was really just vacant. There was nothing there and it was really just like a wasteland. And so aside from the building itself, the project is actually going to finish out the site.”

The horticultural center will also tell visitors its own story about the inhabitants of the mansion, which grew to be Columbia’s grandest residence under the affluent Hampton and Preston families, and the time periods preserved in the house and on its grounds. The Hampton-Preston mansion was home to several different owners following the Civil War before being extensively rehabilitated and opened as a historic site in 1970.

“At the Hampton-Preston site, even though they cover a number of time periods inside, most of the discussion is centered around the Hamptons and the Prestons themselves, who lived in the house up to the Civil War,” Mearns said. “The gardens of the site reflect what we believe to be the height of the garden under their control. That represents a time period between 1840 and 1860 on that site.

“The Hamptons and Prestons were among the wealthiest families in the country. They had numerous plantations, all worked by enslaved people. This particular property, while it did have enslaved persons working on it, had nothing to do with production of anything. At best as we can tell, there may not have been even a vegetable garden or anything. This particular property was entirely for show. So the gardens and the plants really reflected the extreme wealth and influence of the family.”

Inspired by the families’ travels through Europe in its design and featuring exotic plants such as bananas, plantains, passion vine and a whimsical creation called a scented geranium that was an ancestor of the citronella plant, the Hampton-Preston gardens provided an outward sign of the privileged life behind the Doric columns that hold up the mansion’s sweeping front veranda.

“We know (the gardens) were full of a lot of specimen plants, things that were both rare and probably difficult to keep alive in great abundance throughout the site,” Mearns said. “So people being able to come in and see that, even before they get into that house and see all of the fancy stuff they have in there, it was immediately apparent what these people were about.”

Added John Sherrer, Historic Columbia’s director of cultural resources: “You’re looking at a site that, in 1850 all the way up to the 1860s and the early 1870s, was often written about in travel logs, people coming to Columbia and visiting various sites. Oftentimes they would comment on the horticultural beauty here at the Hampton-Preston site.

“One aspect of the property they often commented on was the greenhouse that the family had.”

The greenhouse and an ancillary project, a gatehouse aimed at replicating the property’s original summerhouse, was made possible by a $2.5 million gift from Darnall W. and Susan F. Boyd Foundation, a Midlands philanthropic organization and longtime Historic Columbia partner.

“The Boyd Horticultural Center is really the crowning achievement of the Robert Mills Historic Garden District. It’s part of Historic Columbia’s cultural landscape master plan that was established well over 15 years ago,” Sherrer said. “The idea behind that was to use each one of the properties under Historic Columbia’s care — the Robert Mills House, the Hampton-Preston site, the Siebels House, the Museum of Reconstruction at the Woodrow Wilson Family Home, the Modjeska Simkins site, and the Mann-Simons site — to all reflect some aspect of our horticultural heritage, and in the process of that, to develop a pedestrian linkage system that connects all of those properties so that if you’re walking the district, you’ll have a cohesive experience.

“Susan Boyd was a member of our garden steering committee and garden restoration committee that was responsible for really envisioning what the cultural landscape master plan could do for the city of Columbia.”

To populate the greenhouse, Historic Columbia combed through historic records, including firsthand written accounts documenting the plants that decorated the grounds in the 1800s. The greenhouse will include some still-living species, including those traced to the influential antebellum Pomaria Nursery in Newberry County.

“We don’t always limit ourselves to historic record, but we do begin there and try to locate as many correct species, correct cultivars, or even in some instances collect living material from plants that are still alive from the time period around the state,” Mearns said. “Some of those plants are still alive. They’re at the very least direct descendants of what was available to those wealthy families.

“We do have a very limited firsthand account of the grounds and gardens at Hampton-Preston, so we do have a small list of species we know were there somewhere. We have brought back a bunch of those to the grounds, and we kind of expanded from there using other people’s firsthand accounts that may not be very scientific. They may have not had a lot of knowledge about plants but they give you a really good feel for what it looked and felt like here.”

As far as the actual design of the greenhouse, there was even less material to go on.

“We know from one historic photograph that there is a greenhouse still standing in about 1890,” Sherrer said. “The structure that we have today is far larger and far more modern, as you can imagine, than the greenhouse that once stood here, but this is the location where the family maintained either one or two greenhouses. We do have a sketch that drawn in 1942 by a soldier who was stationed at Fort Jackson. He came and visited the Hampton-Preston site and did extensive drawings to create a map of the property.”

In the absence of abundant detail, Historic Columbia worked with Columbia-based Lambert Architects to create a design that would be both functional and eye-catching.

“Working with their team, we came up with a plan that would allow Historic Columbia to have a lot going on under one roof,” Sherrer said. “When you come to this greenhouse, you’ll see propagation of plants. You’ll see interpretation and storage of plants, but you’ll also see other activities. There will be programs here. We’ll have our cultural or grounds offices here, and we’ll also have storage. This is really kind of the epicenter of our horticultural efforts.”

A support structure integrated into the north elevation of the 4,000-square-foot building includes such details as glass-block windows that reference a modern automobile dealership, Wilson Motors, that occupied the property from 1949 until it became Pulliam Ford in the 1960s. That building was demolished in 1969, Sherrer said.

The 3,000-square-foot greenhouse, featuring clear glass and an aluminum frame, is being assembled by Wisconsin Greenhouse Co. As of late November, construction crews had installed vents to regulate temperate and humidity and were busily completing outdoor hardscaping.

The horticultural center is expected to open next spring.

“With each passing season, the grounds will grow in maturity,” Sherrer said. “They’ll grow in scale, and I hope and I fully expect that the burgeoning numbers of people we see walking around and coming for site visits, taking tours, will increase as well. This has been just a fantastic curiosity for so many people coming around, and historically, that’s exactly what you would have had here, is a place where beautiful, interesting plants were showcased.”