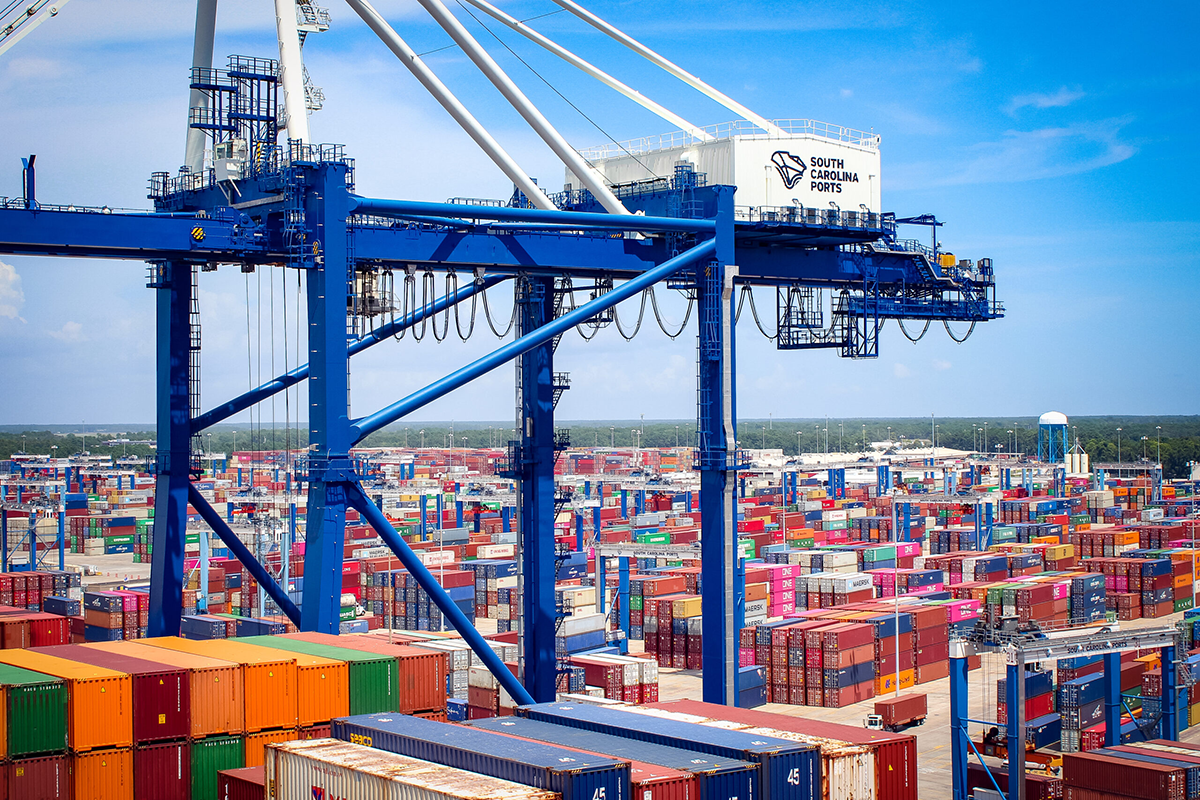 In April 2020, the S.C. Ports Authority budget called for a 10% reduction in volume as the pandemic rolled across the global supply chain.

Jim Newsome, SCPA President and CEO, had no idea if even 1.23 million containers would be achievable, but he couldn’t imagine articulating a 30% reduction — and wasn’t prepared to let go of any employees in such a skill-driven industry.

“I was nervous,” he said. Like other CEOs, he had never managed a pandemic before.

Little did Newsome know that the SCPA would soon see record volumes that kept on climbing. He anticipated the port losing nearly 15% of cargo volumes in fiscal year 2021, when in reality numbers rose 10%.

Newsome sat down with the Charleston Regional Business Journal to talk about the year that’s past, and more specifically, the year ahead as the country navigates year three of the pandemic.

Newsome admits the SCPA was late to the game when the agency began focusing on retail in 2020, but coming on board when they did couldn’t have been more crucial.

With the pandemic causing e-commerce to skyrocket, be it gadgets to pass the time, clothing and late-night QVC orders or home furnishings, the port has benefitted from increases in cargo imports.

Newsome owed much of that shift to people being forced to stay indoors and avoid traveling, restaurants and group entertainment. While he expects at some point the scales will tip back, e-commerce is here to stay, particularly as inventory to sales ratio remains rather low, he said.

“There is still some inventory retail to be done,” Newsome said. “I don’t know if you’ve been in a retail store lately, but they are a bit sparse on products on shelves.”

The CEO believes the ports will remain strong through the first half of the year — and possibly even stronger after that because of Walmart Import Distribution Center 7’s opening in Ridgeville, a growing presence with Amazon and export projects that are expected to come online this year.

“I think the fundamentals of our business outside of just normal growth in the Southeast makes the port business just a good place to be. People are moving south and we can still manufacture and we have land to do transloading and things like that,” he said.

With the country importing 20% more cargo than the supply chain was built for, Newsome said the SCPA is bumping up against the same challenges as other ports, including congestion and overflows, but South Carolina is managing because measures were being put into place that helped mitigate some of the issues.

The Hugh K. Leatherman Terminal was constructed to add more berth capacity. The Charleston Harbor was deepened to allow larger ships. A third start time was added at 1 a.m., allowing ships to be serviced between the original 12-hour gap of 7 a.m. to 7 p.m.

Though the HLT hasn’t been fully utilized in year one as intended — seeing only 50% usage at best — the North Charleston Terminal has served as a buffer for the overloaded Wando Welch Terminal, maximizing its capacity and taking on small service ships that can be moved.

“Just open the terminals 24 hours a day,” people tell the CEO as if it’s that simple a call to make.

Newsome wouldn’t argue if it was possible, but to extend hours, he’d need 200 to 300 trucks an hour, or essentially trucks driving around 24/7. Such a number could never happen.

Chassis shortages and empties sitting twice as long on lots have only created more chaos in the industry.

Right now, container dwell times are up from an average 4-9 days to 15 as there aren’t enough distribution centers to support e-commerce, forcing companies to leave cargo indefinitely on SCPA terminals.

“(Companies) don’t want empties back. They don’t have the space for them,” he said. “So guess what that does? That means you can’t pick up a full one, and it becomes a self-fulfilling prophecy of backlog.”

One problem then begets another, Newsome said, and the country has created a chassis shortage, too.

There are two ways to keep cargo in a container. One is to leave containers at SCPA terminals and pay for storage, while the second is to put it on a chassis, take the cargo offsite, park it at the distribution center “and hope for the day when it can be unloaded,” Newsome said.

The result is putting the chassis pool at 100% utilization and companies aren’t playing nicely in the sandbox together. Like toilet paper hoarding, some businesses may corner thousands of chassis to the detriment of everyone else, Newsome said.

“It’s like a traffic jam on 526. There’s just too much in the mechanism right now,” Newsome said.

Watching companies scoop up property westward down Interstate 26 has been gratifying for Newsome.

“It’s what we thought would be the case,” he said.

After Walmart chose to build its newest distribution center in Ridgeville, economic leaders believed it would only be a matter of time until other companies took notice. Since the state can’t grow east because of the water, or north and south because of wetlands, westward is the only direction available.

Companies are expanding into St. George, Holly Hill and Santee — towns that were previously quiet and not immediately associated with business booms.

“We always felt that the global supply chain would locate near a port if we built the right infrastructure and we offered good product. We could attract the business,” Newsome said, adding that the pandemic helped the state because it forced people to look for alternatives. The pandemic gave South Carolina the opportunity to have a discussion with companies that might not have had a discussion with before.

Spending more in drayage to get cargo out to St. George, closer to where domestic trucks handle the cargo that’s transloaded, is a better model, Newsome said. The land’s cheaper. Facilities are closer to the workforce. And companies aren’t competing with the Charleston workforce.

“I believe I’m right in saying that what we did in Ridgeville for Walmart is a catalyst for that whole area of growth. And we felt that start,” Newsome said.

With the end of fiscal year 2022 also comes the end of Newsome’s tenure at the SCPA. In October, he announced his retirement from the agency, and shared that COO Barbara Melvin will take his place.

The first female to run a top 10 operating container port in the U.S., Melvin was identified early on as someone who could ultimately succeed Newsome with the right steps, he said. But she had to run S.C. Ports operations first, initially tackling the Charleston Harbor Deepening Project and the Hugh K. Leatherman Terminal expansion.

Melvin, who has been with the ports since 1998, has since earned an executive MBA to gain formal business training, as well as a supply chain MBA.

By stepping down, Newsome hopes to create room for even more employees to rise up, noting that if he stayed too long, others might not see openings for themselves and leave.

Already, Newsome’s been at SCPA longer than he has remained with any other agency, which is surprising to someone self-described as “restless.”

He admits he considered his tenure when he signed his 2012 contract, ultimately having a 10-year timeframe in mind.

“CEOs have a shelf life,” he said. “You get so many good ideas in the tank.”

Leading up to June 30, Newsome promised to work hard “until whatever time I leave that day as I’ve always done.” Following his retirement, he then will continue to serve as advisor for the next year.

“I’m looking forward to it,” he said. “I’ve got a lot of things I want to do in life both professionally and personally, so I don’t envision sitting at home looking at four walls… My wife has already told me that if I had that in mind, that she doesn’t want me there either.”

Newsome remains hopeful for the port’s future regardless of what happens in 2022.

“I’ve always said to y’all that I think we would grow up above the market in the ports in the Southeast, and I believe that to be true,” he said.