Speakers voice concerns about pending vote by USC board 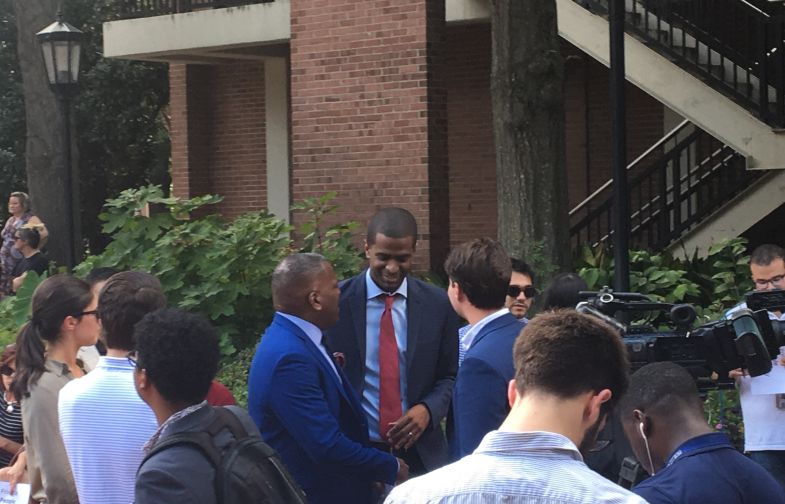 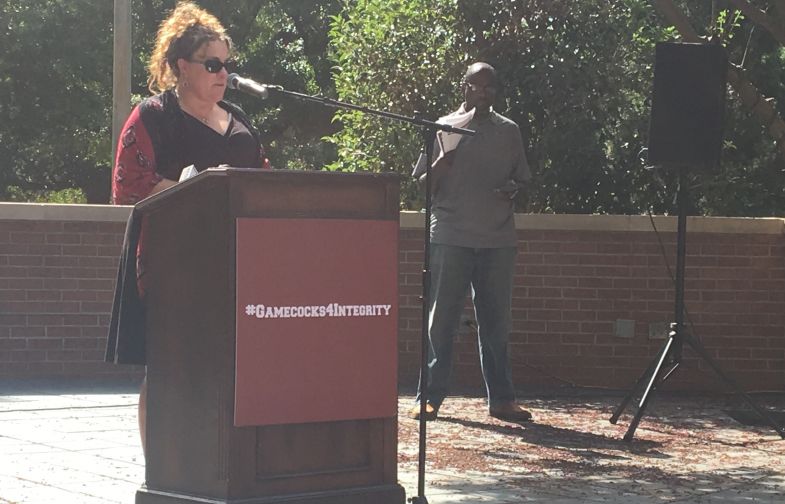 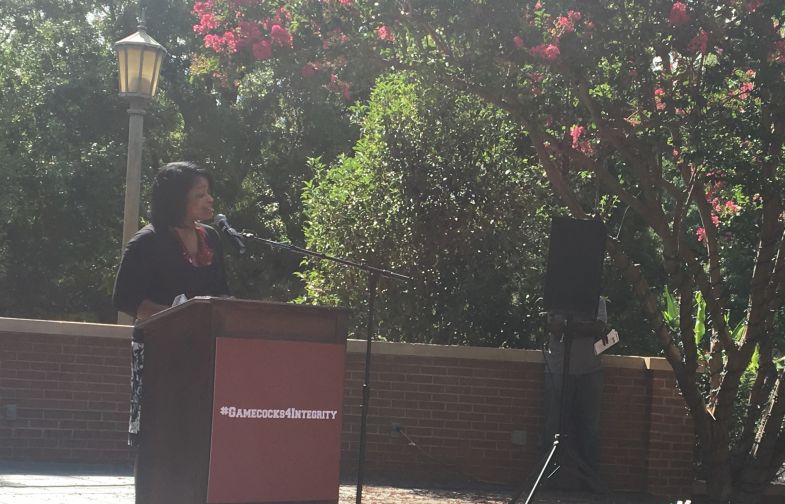 Jennifer Clyburn Reed, a USC graduate and director of the university’s Center for the Education and Equity of African American Students, speaks Wednesday. (Photo/Melinda Waldrop) 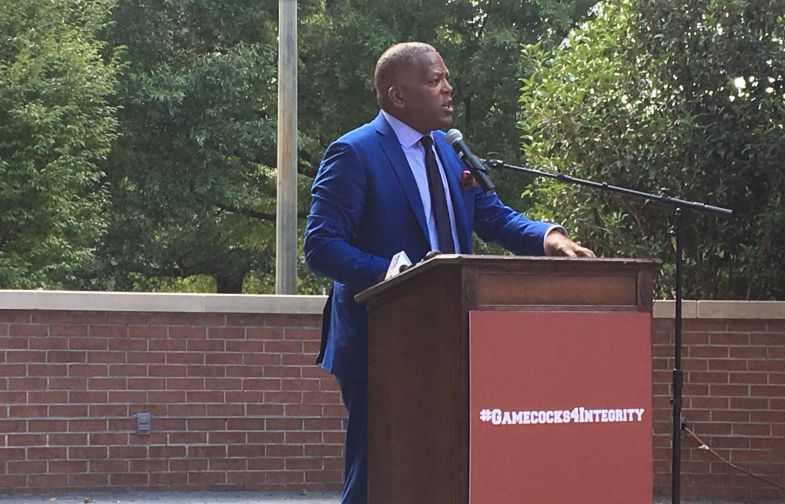 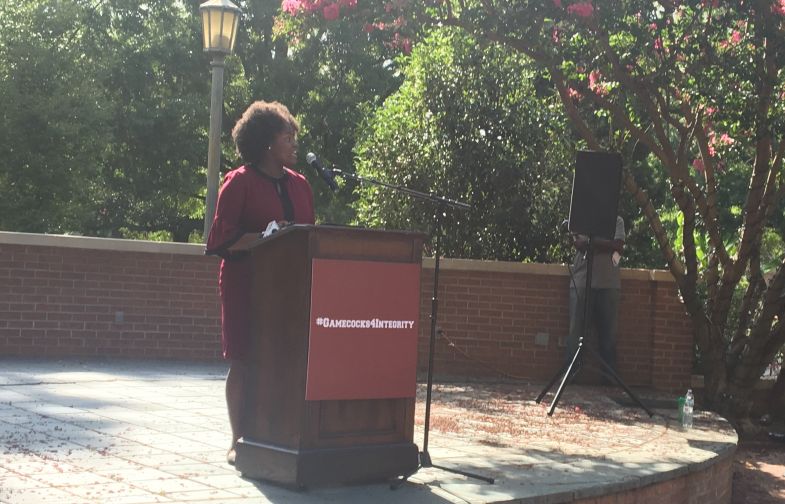 USC student Lyric Swinton criticized Gov. Henry McMaster for pushing for a vote while many students are away during summer session. (Photo/Melinda Waldrop) 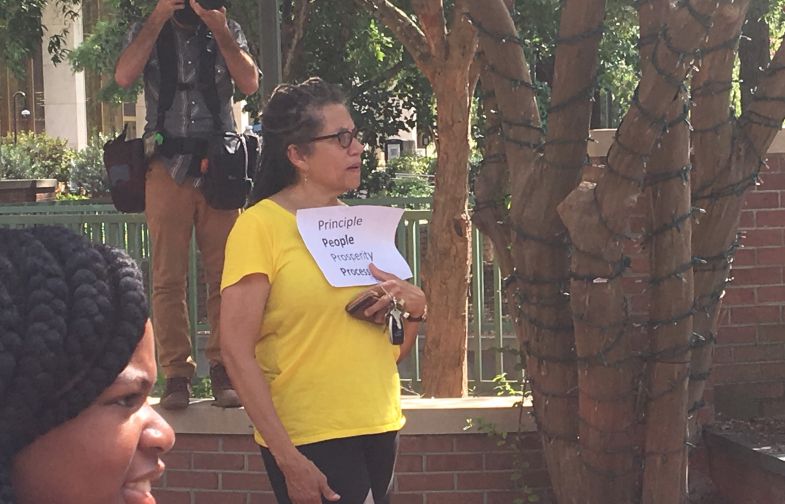 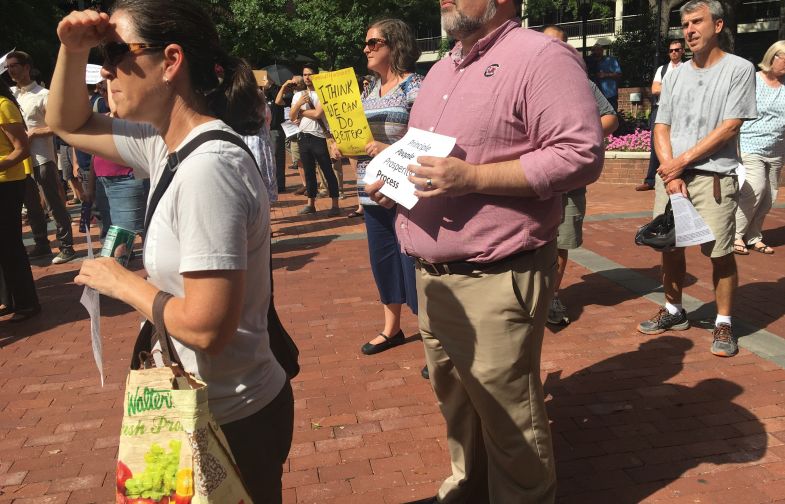 Editor's note: This story has been updated to include comment from the governor's office.

Holding signs touting “Principle, People, Prosperity, Process,” dozens of University of South Carolina faculty, staff, alumni and supporters renewed calls for Friday’s pending vote on a potential new university president by the USC board of trustees to be canceled.

Warning of consequences that could include loss of accreditation and a detrimental effect on recruiting, speakers including Columbia Mayor Steve Benjamin and Bethany Bell, an associate professor of social work and the university’s Faculty Welfare Committee chair, took to the microphone on Wednesday under a blazing sun on the Russell House patio.

The board of trustees is scheduled to vote on whether to install Lt. Gen. Robert Caslen as the successor to Harris Pastides, retiring in August after 10 years as USC president. Seen as the frontrunner of four presidential finalists approved by the board earlier this year, Caslen, a former West Point superintendent, was the only finalist with experience leading an institute of higher learning. But an outcry over a lack of diversity among the quartet of male contenders led the board to reopen the search in April. 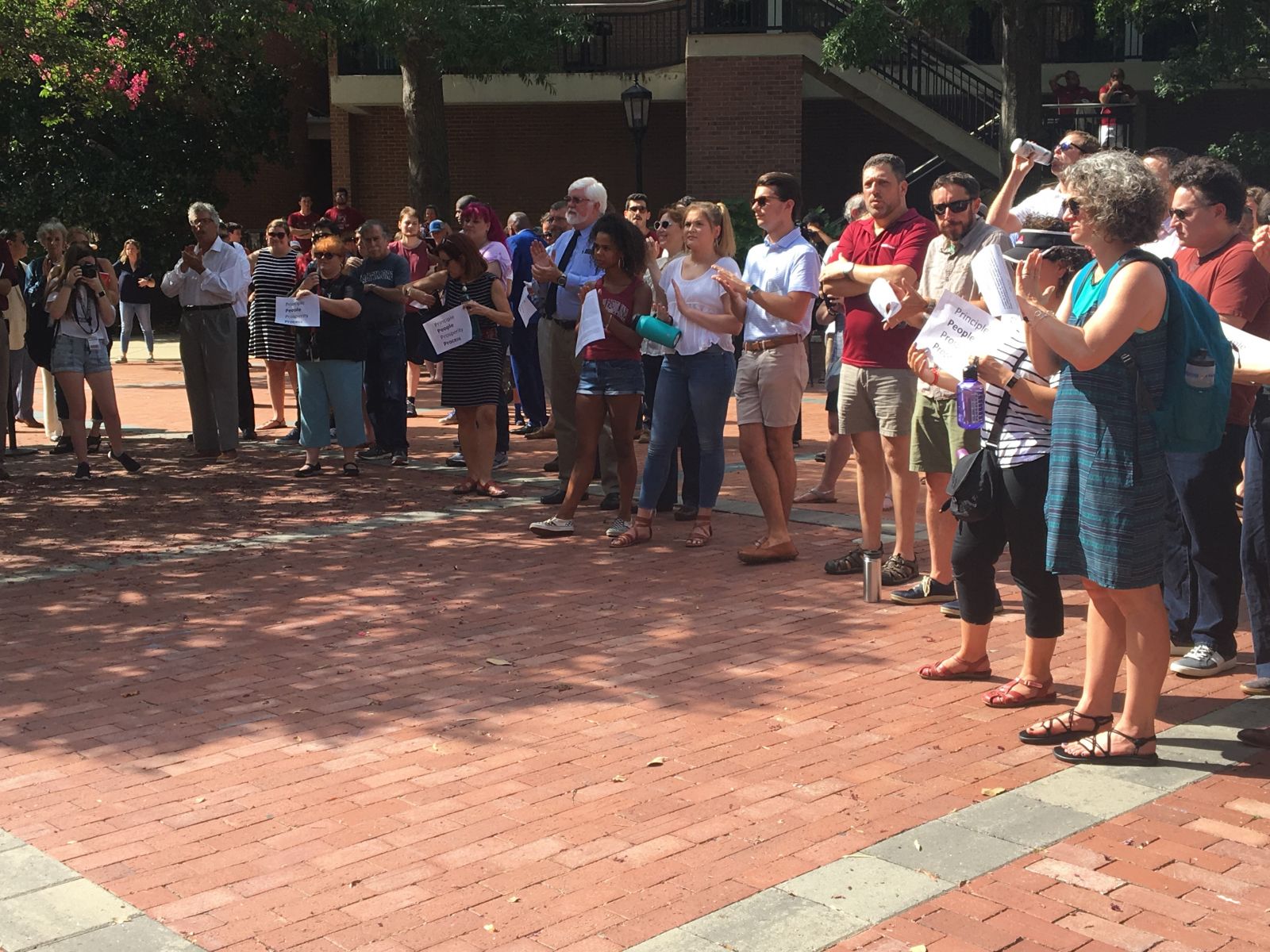 Gov. Henry McMaster has pushed for a vote on Caslen. A board of trustees meeting hastily scheduled for July 12 to hold a vote was canceled after Circuit Court Judge Robert Hood issued a temporary injunction, noting that state law requires five days’ notice of USC board meetings.

McMaster is the ex officio chair of the board of trustees, serving for the duration of his tenure as governor.

“In his capacity as the ex-officio chairman of the university’s board, the governor has contacted each of his fellow board members and has encouraged them to select a permanent president for the University of South Carolina as soon as possible. To suggest that the governor, who by law is a member of the board of trustees, did anything improper is preposterous," said Brian Symmes, spokesperson for Gov. McMaster. "Gov. McMaster has made no secret about the fact, that as a member of the board, he believes General Robert Caslen is supremely qualified and is perfectly suited to address the challenges ahead for the University of South Carolina.”

The board rescheduled a meeting for 10 a.m. Friday, the same day a hearing on the injunction is scheduled. The board will meet at the Pastides Alumni Center at 900 Senate St.

The agenda, posted Thursday, includes an executive session to discuss the presidential search, followed by a "presidential election."

Speakers at Wednesday’s gathering of a group dubbing itself Gamecocks4Integrity referenced a letter sent to USC by the Southern Association of Colleges and Schools, the agency responsible for the accreditation of regional higher education institutions, detailing concerns with the presidential hiring process. The organization’s bylaws state that a school’s governing body must protect it from undue external influence.

Jennifer Clyburn Reed, a USC graduate and director of the university’s Center for the Education and Equity of African American Students, worried that degrees from USC would lose their value and possibly not be accepted by graduate schools if the university lost its accreditation or faced sanctions.

Benjamin is also a USC graduate and former student body president who served on the presidential search committee.

Benjamin said during a news conference on July 11 that when he called McMaster to voice concerns about the originally scheduled meeting, McMaster told him he had not met Caslen but “heard he was a good guy.”

That admission left him “surprised,” Benjamin said Wednesday. “It’s such an important decision. This institution has $1.7 billion budget, 6,000 employees and 50,000 students (and is) of crucial importance to the economic, educational, and social infrastructure of the state, and the governor didn’t think it was important enough to meet the man that he’s advocating for — actively, aggressively lobbying for — to become president of our university?”

Benjamin said that regardless of Friday’s outcome, “this fight is ongoing.” He said that several Freedom of Information Act requests are pending, and that legal action could follow “as soon as Friday.”

“The board of trustees is a majority of attorneys,” said Benjamin, who also served as Student Bar Assocation president at USC's School of Law. “I would encourage them to use the legal education that most of them acquired here at the University of South Carolina to follow the law and do the right thing.”

USC student Lyric Swinton echoed calls to have a student voice as well as a faculty vote on the board of trustees and said presidential candidates should visit branches throughout USC’s system, not just the Columbia campus.

“A lot of people had lots of different reasons to dislike the candidate pool,” Swinton said. “Where we are now, most of it is targeted towards one particular candidate, but I really don’t think it’s about the candidate anymore. It’s more about the process.”

So dozens of people out of 30,000 + students, faculty and alumni showed up to voice concerns about the selection process. Now that is “not” an impressive representation of the USC stakeholders and makes one wonder why the press is making such a big deal out of this crowd. I can get more than that to show up for a food truck rally. Hope the board does its job as it should have earlier and hold the vote.