An earlier version of this story misspelled the name of the first female commandant of West Point. Her name is Gen. Diana Holland.

The University of South Carolina board of trustees elected a contentious candidate as the school’s new president on Friday despite calls from faculty, alumni and USC’s largest donor to reopen the search process.

At a specially called meeting in Columbia, the board elected Lt. Gen. Robert Caslen Jr. to replace Harris Pastides, who is retiring after 10 years. Caslen will receive an annual salary of $650,000.

A motion to elect Caslen passed with 11 yes votes, eight no votes and one vote of present.

“Shame on you,” USC associate professor Bethany Bell told the board after the vote, and an extended chant of “Shame! Shame! Shame!” broke out among those gathered outside the filled-to-capacity meeting room at the Pastides Alumni Center. 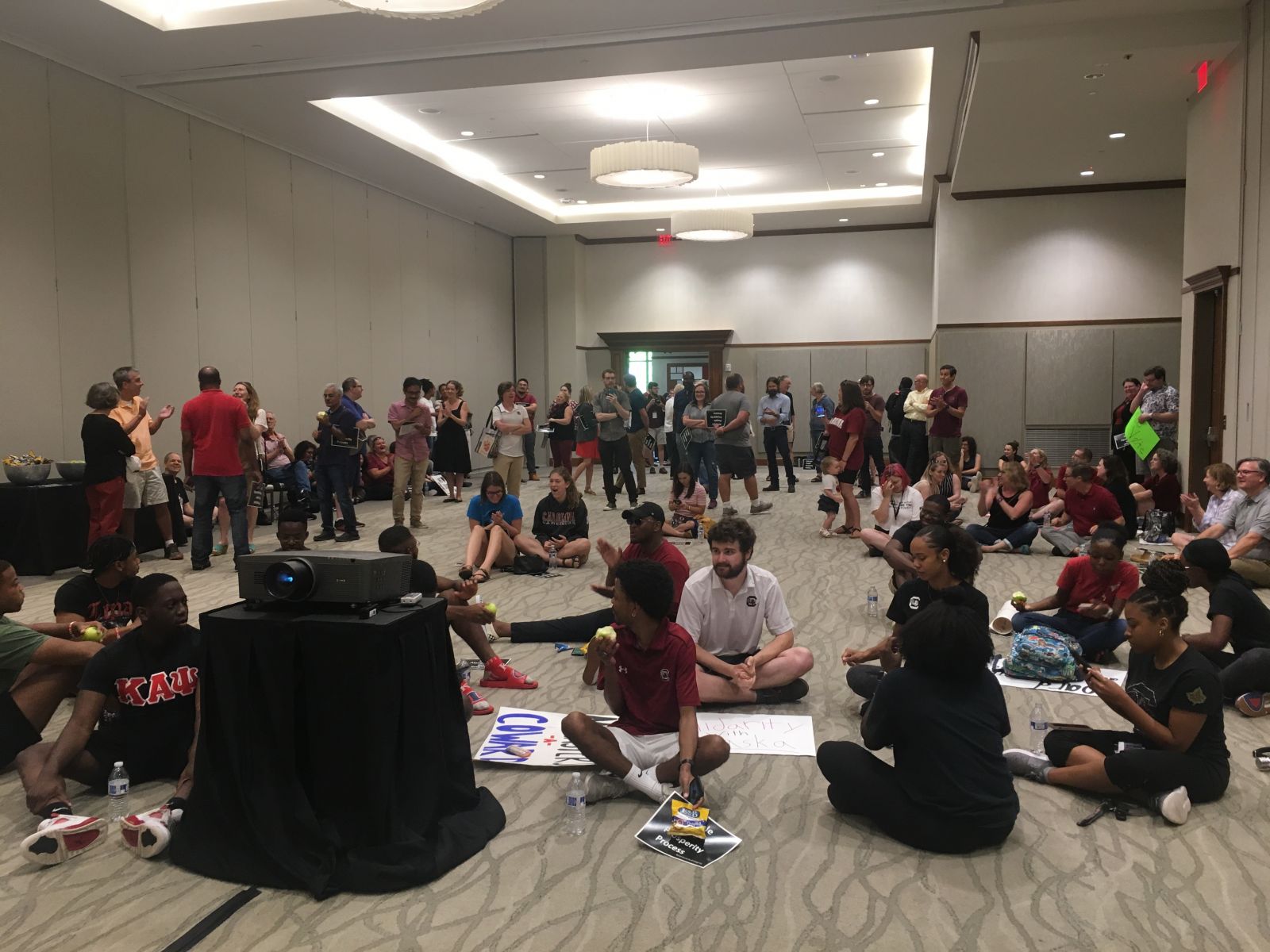 The vote came after two weeks of controversy surrounding Caslen’s candidacy. Caslen was one of four finalists identified by a search committee, but the university decided to reopen the search after an outcry over a lack of diversity among the four male contenders. Caslen was also the only candidate with previous experience leading an institute of higher education.

However, Gov. Henry McMaster, who serves as ex officio chair of the board, pushed for a vote on Caslen.

“In his capacity as the ex-officio chairman of the university’s board, the governor has contacted each of his fellow board members and has encouraged them to select a permanent president for the University of South Carolina as soon as possible,” McMaster spokesman Brian Symmes said in an emailed statement. “To suggest that the governor, who by law is a member of the board of trustees, did anything improper is preposterous. Gov. McMaster has made no secret about the fact, that as a member of the board, he believes Gen. Robert Caslen is supremely qualified and is perfectly suited to address the challenges ahead for the University of South Carolina.”

Bell, the university’s Faculty Welfare Committee chair, leads a group of faculty, staff and alumni called Gamecocks4Intergrity who rallied Wednesday to call on the board to cancel the vote.

On Thursday evening, influential USC donor Darla Moore, whose name is on the university’s business school, weighed in on the matter. In a letter to board chair John von Lehe, Moore wrote that the selection process should be restarted, saying that Caslen does not have the support of university constituencies.

Moore has donated more than $75 million to her alma mater.

Before the vote, von Lehe said the body takes concerns about Caslen’s candidacy and the election process seriously, but that those concerns “must be weighed against Gen. Caslen’s considerable qualifications.”

The board met one week after a previously scheduled meeting was canceled because of a court order. A Richland County Judge determined the public was not given five days’ notice of the meeting, in violation of state law. McMaster requested the meeting last week.

“I am honored to be chosen to lead this great institution,” Caslen said in a news release from USC. “I fully recognize the challenges the board addressed to get to this point, and I am grateful for their support and confidence. I will work tirelessly to listen to all of our students, faculty, staff, board members and all our constituents to understand their concerns and issues, and I will actively seek their advice.”

About 300 students, faculty, alumni and community members attended the meeting or waited outside the meeting room.

USC student body president Luke Rankin told the board he has heard from students who both support Caslen and who oppose him. The students’ objection is more about the election process, he said, noting the vote came during USC’s summer session, when few students are on campus.

“My role is to be the voice of the students,” Rankin said. “They believe our voice has been left out of this process.”

Board member Charles Williams, at whose request the court injunction was issued, spoke against a vote on Friday.

Board member and S.C. Superintendent of Education Molly Spearman said she spoke to Caslen after the search was reopened and came away from their wide-ranging conversation, which touched on public education, convinced that he deserves a chance to lead USC.

“I was extremely impressed with his ideas and his vision,” Spearman said. “ … I have full confidence in the general to lead us.”

A vote to postpone a vote indefinitely failed by an 11-9 vote.

Christian Anderson, a USC associate professor and president of the newly formed university chapter of the American Association of University Professors, said the future looks bleak at the state’s flagship university.

“I was opposed to a vote under political pressure. I was opposed to holding a vote in the summer with little notice, without going through the process like they promised they would back in April. I fully expected that we would see the search reopened after the school year started and solicit new candidates.”

Retired lieutenant colonel and 30-year Army reservist Ray Moore, who also attended the meeting, said Caslen is the best person for the job.

“He’s got a wonderful reputation,” Moore said “ ... The best people in the military and in the army get chosen to be superintendent  of West Point, so this is a big deal, and it’s a wonderful thing for the state of South Carolina.”

A group including Columbia Mayor Steve Benjamin and several members of the General Assembly protested the original meeting last week at the Statehouse. Benjamin joined USC faculty, alumni and students at a news conference Wednesday, where speakers voiced apprehension that a board vote could threaten the university’s accreditation from the Southern Association of Colleges and Schools, which sent a letter to Pastides last week expressing concern over the proposed vote.

Benjamin said after that gathering that legal action could swiftly follow Friday's vote.

After reopening the search, the board appointed USC Upstate Chancellor Brendan Kelly as interim president, a position Kelly was to assume Aug. 1.

“I am eager to start meeting with students, faculty and staff, and my goal is to work collaboratively with our entire university and system community to address challenges, to build confidence, respect and trust, and to create new opportunities,” Caslen said in the USC statement. “I also want to thank those who supported my candidacy and promise to lead this institution with the highest integrity, respect and character.”

Caslen retired from the Army after a 43-year military career and was most recently the senior counsel to the president the University of Central Florida.