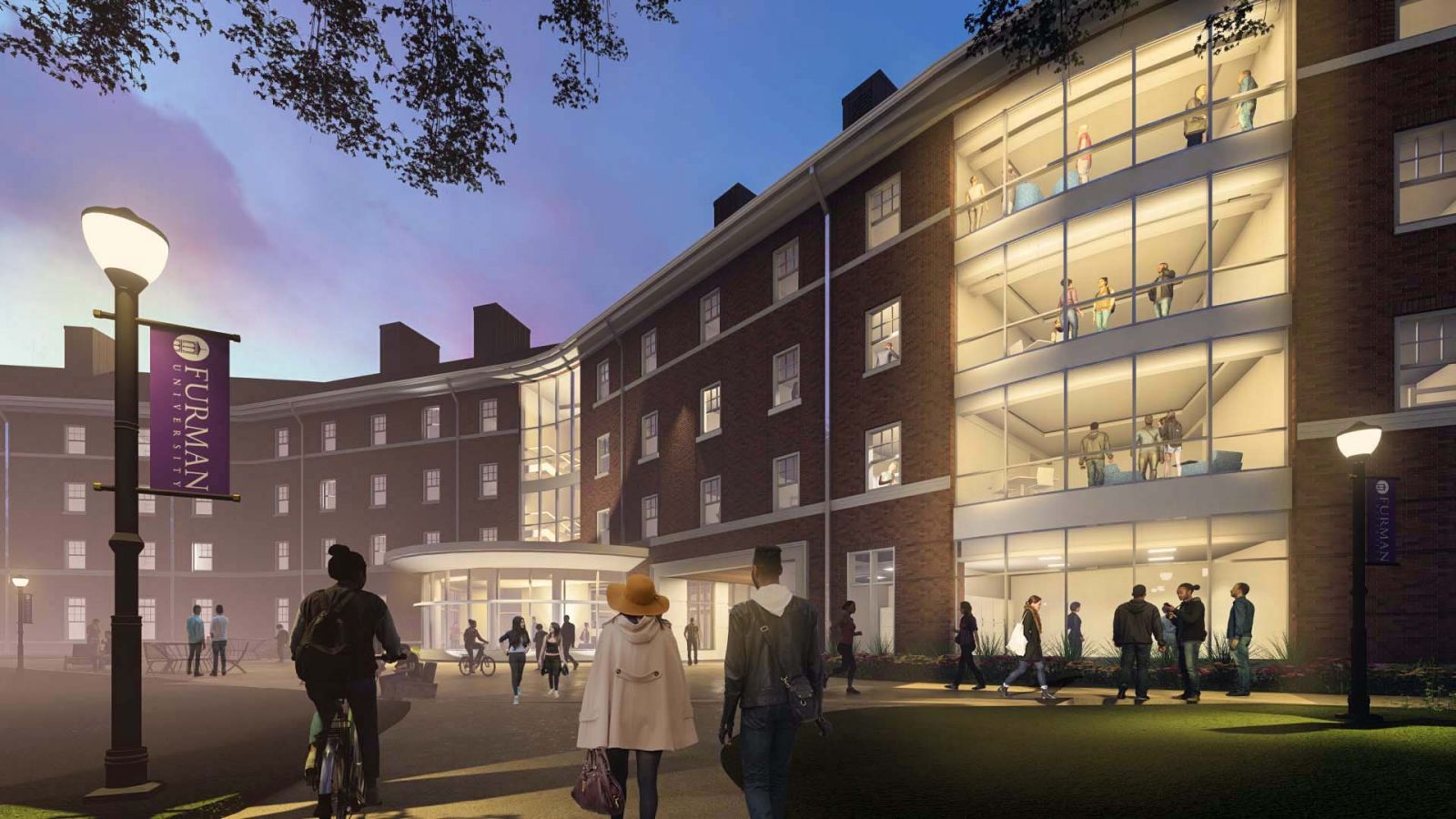 Furman University will break ground in February on a $70 million project to build a new residence hall and update four others in the South Housing complex for first-year students.

The project will replace the current Blackwell Hall, relocate the Center for Inclusive Communities into the new hall and introduce modern amenities in the new and existing halls including safety upgrades, entrance accessibility, new bathroom layouts and fixtures, social spaces and information technology improvements.

The groundbreaking event for the project will take place on Feb. 12, and construction is slated to begin in March.

The first students to move into the new residence hall, with an expected completion date of fall 2023, will be members of the class of 2027. The school expects the entire renovation and construction project to be finished in November 2024.

The project will be funded through financing, including approximately $31.2 million for the new first-year residence hall.

The renovations of residence halls Manly, Geer, McGlothlin and Poteat, and construction of the new residence hall will grow the overall total beds for South Housing to 718, ensuring the entire first-year class is housed in one location.

“The South Housing renovation and construction project will not only enhance the residential experience for first-year students but will create a residential village that strengthens the connection to the core of campus, much like the Trone Student Center renovation and boardwalk provided a few years ago,” Connie Carson, vice president for Furman’s student life office, said in the news release. “The first-year South Housing experience will better connect students to each other in the various halls while serving as a centerpiece for student activity both inside and outside residence halls.”

The university administration is discussing ways to continue to honor the former president.

“By reimagining the first-year residence hall from the ground up, we are creating a vibrant student hub, one with new personal and social spaces for students to gather and connect for years to come, setting their trajectory for success at Furman and beyond,” Furman President Elizabeth Davis said in the release. “This project enhances the safety, accessibility, security and privacy components of all the residence halls in South Housing, while also advancing the university’s sustainability goals.”

The design will offer additional space for the Center for Inclusive Communities, which will move from the Trone Student Center, to grow programs and initiatives, according to Deborah Allen, who served as the director of the center until last week and played a central role in the project’s early planning, according to the release. The new building will include reception and office spaces, a kitchenette, meeting and lounge spaces and support services.

“Now in its fifth academic year, the CIC continues to cultivate an inclusive and welcoming environment for Furman’s historically underrepresented students to thrive as their authentic selves,” Allen said in the release. “Staff foster opportunities for students to engage with people from various cultures and identities and reflect deeply on their own intersecting identities.”

The center coordinates activities and events focusing on first-generation students, cultural heritage and awareness, the LGBTQ community and the legacy of the Rev. Martin Luther King Jr., among others. Rod Kelley is serving as interim director of the center while a national search is conducted.

Missouri-based Mackey Mitchell Architects is partnering with McMillan Pazdan Smith, which has offices in Atlanta and the Carolinas, to serve as the design team. The construction management company on the project is Rodgers Builders, a women-owned firm headquartered in Charlotte. The firm also managed the Townes Center for Science addition and renovation, which was Furman’s largest project to date. As part of this new South Housing project, Rodgers Builders will be contacting minority-owned businesses to perform some of the subcontractor work.