With a long career as a marketing executive under his belt, Joe Erwin knows a lot of ways to measure success.

For his latest entrepreneurial endeavor, owning and operating the Greenville Triumph professional soccer team, some of the obvious ways include counting ticket sales – about 2,500 per home game halfway through the inaugural season – or the sale of merchandise. Fans are buying Triumph gear behind only two other teams in the 10-team startup of the United Soccer League. In sponsorships, the Triumph comes in second in the league and has the single largest sponsorship deal, an agreement with Bon Secours.

But Erwin gets a charge out of another measure as he drives around the Upstate: the proliferation of  small and understated shield-shaped Triumph magnets stuck to what he says is a surprising number of cars. 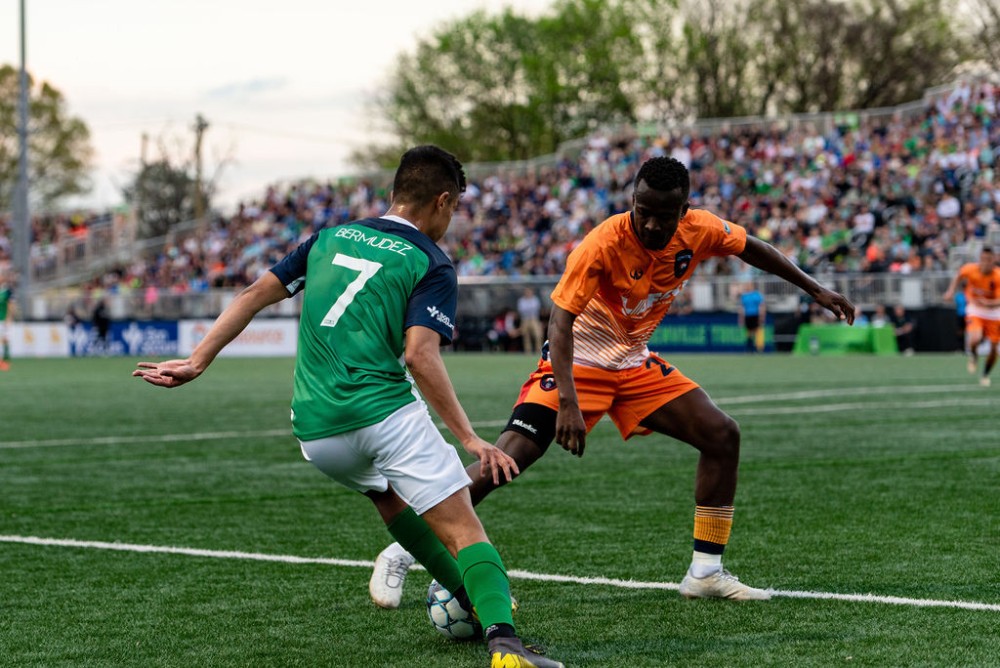 “The response has been great,” said Erwin, chairman of the Greenville Triumph Soccer Club. “We are really, really pleased with the way the community has received us. The receptivity to the brand has been terrific. Media coverage (of the games) has been great. One of the things that I measure is that shield – how many cars I see that thing on. It’s everywhere. We didn’t anticipate that so that’s a good indicator of interest.”

USL1 includes teams as near as Statesboro, Ga., and Chattanooga, Tenn., and stretched across the country to Tucson, Ariz., and Madison, Wis. One of three expansion teams next year will be in Toronto.

The USL Championship league has grown to 36 teams in the last eight years – including the Charleston Battery and Atlanta United 2 – with plans for three more teams next year.

The success of that league was part of the reason Erwin felt good about wading into the business of sports.

“I’ll be honest, it’s challenging,” Erwin said. “This is a professional league. These guys (the players) are all paid. We give them housing. We provide health care in the form of sports medicine. This is an expensive proposition.”

Erwin and son Doug Erwin, vice chairman and chief brand officer for the team, spent about a year analyzing data, considering whether a club could remain solvent, and looking for a home field. (When a suitable field proved elusive, Doug Erwin found the pitch at Legacy Early College by going to Google maps and looking for green rectangles.)

“Even the franchise fee is nothing to sneeze at,” Joe Erwin said. “It’s $500,000 just to acquire the franchise and that’ll probably go up now that the league is established. And we had to guarantee another $250,000 as a set aside, a security deposit, so that if we mess up and fold operations in the first year, they also get that $250,000 payment. So there’s real motivation to succeed.”

When the team was announced in March 2018, they not only had no field, but no coach, no players, no identity. Fifty-four weeks later they fielded a team including players from seven nations against the South Georgia Tormenta in Statesboro and hosted their first home game the following week, a 2-1 sellout victory over the Lansing team, packing 4,014 people into the small stadium.

The three main revenue streams are ticket sales, sponsorships and sale of team merchandise, with some additional revenue coming in from concession sales. The team doesn’t get a share of revenue from games broadcast on ESPN Plus.

The Erwins look forward to their first full offseason and having some baseline data to charge into year two.

“We’re learning every day,” Joe Erwin said. “I don’t want to say we’ve made mistakes, but we’ve learned things about what we think we can do to have bigger crowds. We had to see those metrics: sponsorships, attendance, merchandise. We had to get a baseline for how much of that we need on a year over year basis to cover our costs.”

He’s calling the first season “year zero” because, despite research and analysis, he didn’t really know what to expect.

“I couldn’t look at our president, Chris Lewis, and say, ‘Chris, here’s your budget for the field and the coach and this and that’ because we were making it up. You don’t know what the revenue stream is going to look like. In the first year almost all of the stream was outgo with almost no streams of revenue coming in. That’s started to shift now because we are doing well on attendance, merchandise and sponsorships.”

The team and the entire league are also finding validation, Erwin said. Finding broadcast time on an ESPN channel and getting league standings into the Greenville News sports section were satisfying milestones, he said. Another is seeing just how fanatical fans can be.

A difference, according to Doug Erwin, is the league is its own destination.

“We provide something that is not the norm for minor league sports. No offense to the (Greenville) Drive, who we love and have worked for, and with, a lot. But what is their on-field goal? Player development. Get the kids to Boston. … We want a trophy. We’re results based and we’re competitive and it gets people passionate, gets people screaming at the refs.”

The Reedy River Riot is an enthusiastic group of about 150 people who sit in the stadium with painted faces and bang on drums.

They’re part of what Joe Erwin calls the “beers and beards crowd,” millennials who are looking for a different sports experience and see soccer more like the rest of the world sees the sport.

“It’s unlike other minor league sports where you go and you’re kind of a passive fan, where you go to hang out with friends and family and let the kids run around,” Joe Erwin said. “Here people come to watch the matches. They don’t budge. They don’t go out until half time and they are into the game. Soccer fans are hard core.”

That’s one of the reasons Erwin said he receive immediate support from the Greenville Chamber and its CEO, Carlos Phillips, who saw what a professional soccer team did for Louisville when he worked for the chamber of commerce there.

All three of the professional teams in Greenville are good for the business environment, Erwin said, but soccer is especially good for business with international ties. The Louisville team became a tool for the chamber there, and he anticipates the Triumph being a tool for the Greenville Chamber. It makes the community attractive to international businesses looking for a North American headquarters, and it also makes a community attractive to young talent – the beers and beards crowd.

The team management is working to find ways to sell more tickets, merchandise and sponsorships – and with almost a year of experience behind them, they better understand how to do it – and eventually a decision will be made on whether to stay at Legacy field or engage some kind of public-private effort to build a stadium. But Erwin said his overall mission already seems to be working.

“The mission for us … just to be perfectly candid, we don’t care about making money. Now, we don’t want to lose money,” he adds quickly. “We want to be sustainable – we need to be sustainable – but for us this is a mission. It’s about creating joy and opportunity for young people who will be able to relate to the players. ... These players, by the way, are damn good.”

Thank you Erwin family, Chris Lewis, and John Harkes for creating a great family environment and a fun team to follow. We are season ticket holders and will be renewing for next year. Keep up the good work and push for the playoffs!