Be Pro, Be Proud bringing message to S.C. 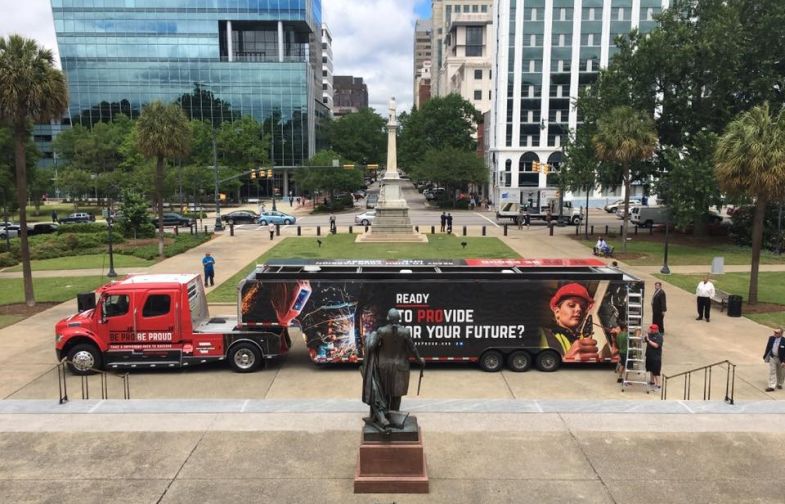 The Be Pro Be Proud truck from Arkansas' program made an appearance at the S.C. Statehouse in 2017. (Photo/Carolinas AGC)

Years ago, there was no doubt in Leslie Clark’s mind.

Clark, vice president of operations and director of government relations for construction trade association Carolinas AGC, would have said with confidence that her sons were going to college to obtain four-year degrees.

Now she’s not so sure, and she’s fine with that.

Her oldest son attends Lexington Technology Center and is interested in pursuing a career in a skilled profession such as construction, welding or electrical work that may mean less time in the classroom and more plying his trade.

“I went to college. Probably 10 years ago, I would have said, ‘Oh, my children are going to college,’ ” Clark said. “He’s a hard worker and he likes to work with his hands and he’s ready to kind of get out in the world and make some money. I’ve said, ‘Have at it.’ Now’s a great opportunity.”

Making sure word about such opportunity gets out is the idea behind a new workforce development program called Be Pro Be Proud launching in South Carolina this fall. The initiative features a custom-built, 53-foot 18-wheeler outfitted with video game-quality simulations of in-demand trades that often require a two-year degree or certificate instead of a four-year degree.

“We’re just excited to be able to feature the trades in a different way,” said Clark, whose association is one of four professional organizations partnering with the S.C. Chamber of Commerce to bring the program-on-wheels to locations throughout the state, particularly rural or underserved communities.

Be Pro Be Proud, modeled after a program in Arkansas, hopes to attract talent to the aforementioned fields as well as diesel technology, transportation and logistics and utility work, among others. U.S. Bureau of Labor Statistics data show available jobs in those sectors are projected to increase by as much as 25% in South Carolina in the next 10 years, according to a news release from the S.C. chamber.

“You’re building the pipeline.. … It helps high school and middle school students and their parents get introduced to the skilled trades and understand you can have a great, successful career, and it’s financially rewarding.”

According to online job site ZipRecruiter’s analysis of employment listings, construction workers in S.C. earn an average of $32,582 annually but can make up to $60,000. Journeyman electricians average $26 an hour, while truck drivers make an average of $48,324 a year and can earn nearly $70,000.

“This is a really great way to empower the kids to make more money for their families,” said Lou Kennedy, president and CEO of Nephron Pharmaceuticals Corp., a West Columbia-based manufacturer and Be Pro Be Proud corporate donor. “I like the idea of doing that in a rural county because if a person wants to stay close to home but wants to find a way to support their family in a larger way, this is a good way to introduce these skills, these trades that can help them support their family in a better way.”

Pitts discovered the Arkansas program several years ago and began trying to bring it to S.C. in 2017, when the Arkansas truck made an appearance at the S.C. Statehouse to mark the initiative’s introduction. But $950,000 earmarked for the program was cut from S.C.’s state budget that year. Last year, the state appropriated about $600,000 to the S.C. Department of Employment and Workforce to administer the program, Pitts said, and the private sector pledged to raise $2 million.

South Carolina will become only the second state in the country to feature the program, according to the release.

“The beauty of Be Pro Be Proud is it doesn’t require kids to have their parents bring them to see it or have a field trip bring them to see it. You can take the trailer to them,” Pitts said. “All communities across the state will have this opportunity to interact with the modules and participate in Be Pro Be Proud. It’s something that you take to the kids where they are, and whether that’s in a diverse environment, or a rural environment, or an urban environment, the entire state is going to get to see the investment that’s made by the private sector.”

For Kennedy, the motivation to support Be Pro Be Proud is personal as well as professional.

“My father is a really good machinist. He inspired me always along the way of how important these trades are,” she said. “He always said to me, ‘Lou, you have to have a degree and you need to be educated, but you also need to have a skill.’ To me, this is a way to promote that sentiment that he shared with me when I was a little girl.”

It’s also a way to expand a workforce pipeline that benefits companies including Nephron, which develops and manufactures generic respiratory medications and produces pre-filled sterile syringes and IV bags for U.S. hospitals.

“I’m also hoping to highlight the sterile pharmacy tech program, because this is an area I feel that’s growing, and we don’t have nearly enough of them in South Carolina,” Kennedy said. “We have to be supportive of what’s going on in the classroom if we expect to have the right employees to hire.”

Pitts said private-sector fundraising is ongoing, with the program recruiting companies to join the Be Proud 100. Companies which contribute at least $15,000 will have their logos included on the 18-wheeler and be part of the program’s August kickoff celebration.

“We by no means are saying don’t get a four-year degree if that’s what you want to do,” Pitts said. “This is a way to introduce them (students) to other opportunities, and opportunities that we think abound and are plentiful here in the state.”