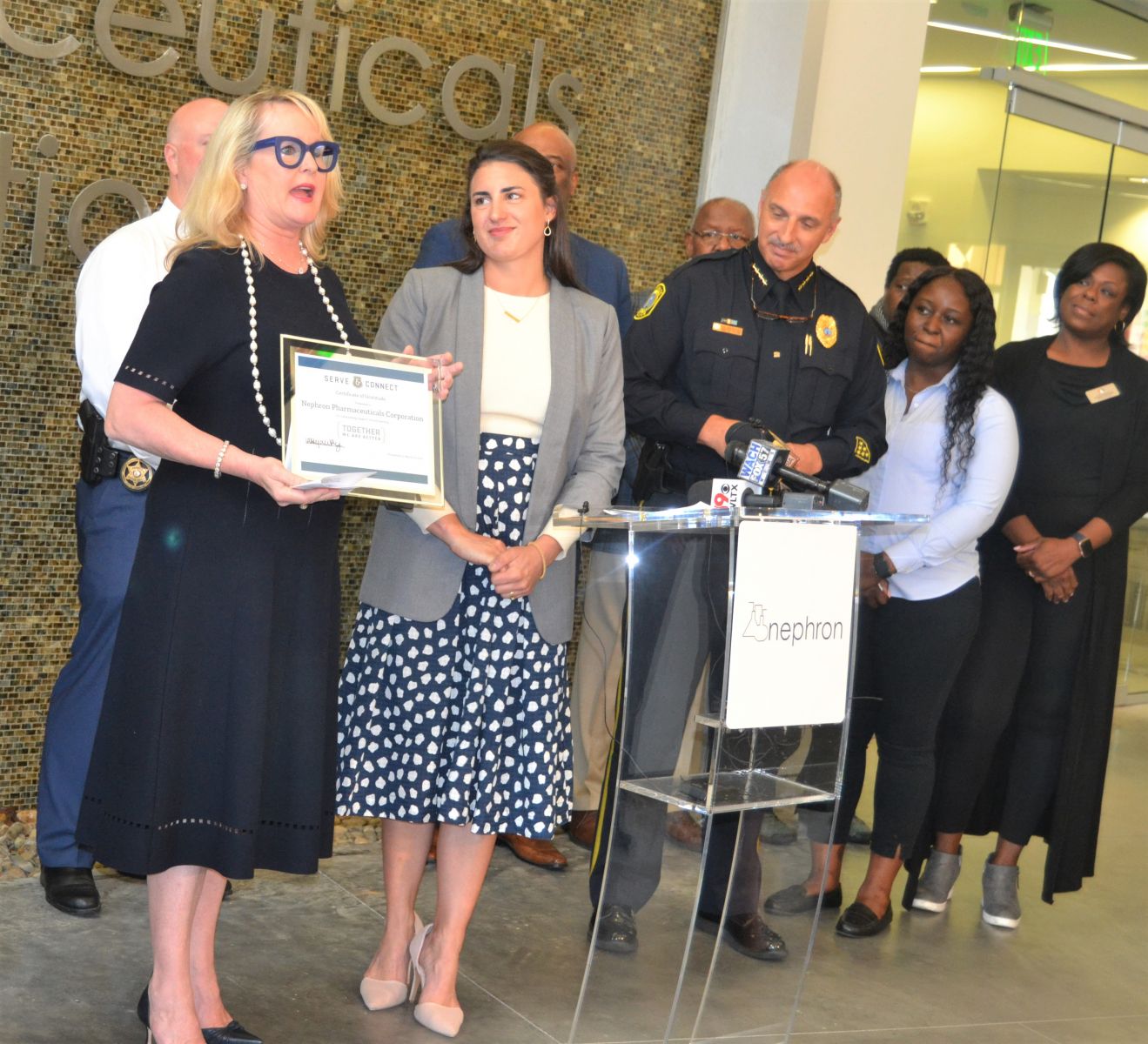 The app, kickstarted by a $10,000 Nephron investment, will be fine-tuned during the next six months by a workgroup made up of S.C. police representatives and community leaders. Its goal is to identify and promote best practices in law enforcement/community relations while providing transparency and measurable data.

“It helps us figure out what we need to do and what’s working and what’s not,” Nephron owner and CEO Lou Kennedy told the Columbia Regional Business Report. “That’s important, and I can’t believe we didn’t already have something like this in place.”

Community policing, defined by the U.S. Department of Justice as a philosophy that promotes the systemic use of partnerships and proactive, problem-solving techniques to address the immediate conditions that give rise to crime, lacks hard data to determine its effectiveness, said Kassy Alia Ray, founder and CEO of Serve & Connect, an S.C. nonprofit focused on bringing police and citizens together to address the root causes of crime and promote community safety.

That’s where the app comes in.

“It’s hard for us to say whether community policing does or doesn’t impact certain outcomes because we aren’t measuring them,” Alia Ray said during Thursday’s announcement of the app’s launch at Nephron’s Saxe Gotha Industrial Park campus in West Columbia. “We measure guns retrieved. We measure crimes. We measure all these sorts of things, but for all the effort that we provide in saying community policing is important, we don’t track it.”

Seth Stoughton, a workgroup member and a professor at the University of South Carolina School of Law, said tracking non-enforcement contacts with the community can provide mutual benefits. Police departments can better allocate resources based on which programs prove effective and which officers connect well with specific communities. Existing literature also shows that improved police/community relations can lead to higher case clearance rates, he said, as people are more likely to share information with law enforcement, while incentivizing officers can promote increased community contact in much the same, if more palatable, way an emphasis on traffic stops might lead to more tickets.

“You can take that same idea and apply it in this context and say, ‘We really want you to be engaged in non-enforcement contacts. We’re going to measure that. It matters to us,’ ” Stoughton said. “There are some measurable improvements that come with improving police/community relationships. I see this data-gathering as kind of a first step in measuring how do we really improve police/community relationships.”

City of Columbia Police Chief Skip Holbrook will chair the 12-member workgroup, which Alia Ray expects to meet for about six months before a pilot is ready for limited testing.

“Perception is reality, and we know that we are very grounded in policing efforts, but we’ve got to be able to measure success, whether it’s front-porch roll calls (or) Coffee with Cops,” Holbrook said. “We have to be able to measure our successes and share those success stories and shape our narrative so that our community understands how we’re policing. … This is an opportunity for us to use technology to our advantage to help tell our story.”

“The reason that’s exciting is because it gives us a way to test technology and an approach between agencies. If it can work in South Carolina, what it suggests is that will work anywhere, because we have the entire panoply.”

As well-suited as Stoughton believes South Carolina is to serve as a test case, Alia Ray envisions the app eventually having nationwide implications.

“This is my big vision. If we’re really effective, what if we put all departments throughout the country on this portal?” she said. “Then we’d be able to use that not only in local communities, but we’d have a research base that could help us be able to measure what kinds of community policing outreaches can be effective, where it’s most effective, and what does it impact. … If this is done well, this is a huge opportunity.”