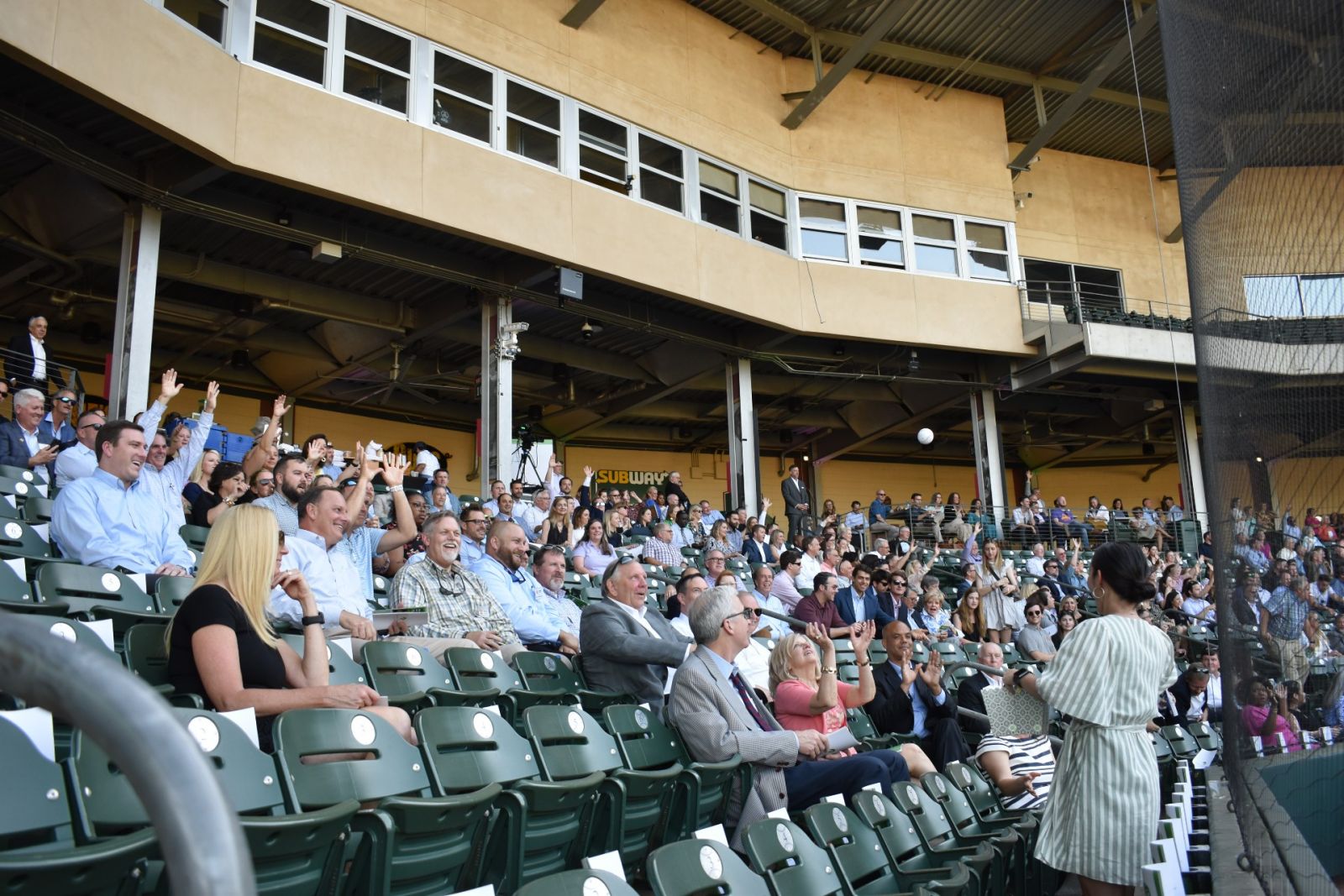 This story first appeared in the May 23 print edition of the GSA Business Report.

In 2022, the not-so-new coronavirus was less of a concern. Bringing a business community together in the wake of two distanced years, more so.

“By the most traditional metrics, the pace of our recovery has far exceeded even our most optimistic expectations, and during this time, the chamber has continued to help Greenville move the ball forward,” Greenville Chamber CEO Carlos Phillips told the crowd gathered on the field and in the stands.

He spotlighted the Greenville Chamber’s creation of a community data platform and the spread of its minority business accelerator into the Charleston and Columbia markets in 2021.

“And the participants have seen almost $30 million in new revenue,” he said of the minority business accelerator graduates. “I see many of these business leaders here tonight.”

The chamber lauded other business and community leaders for their work toward economic recovery and ongoing growth with a lineup of awards throughout the ceremony:

Becky Ballenger, a chamber ambassador since 2019, was announced the Ambassador of the Year, an award sponsored by AFL.

Katherine Smoak Davis of Smoak Public Relations was awarded The Athena Leadership Award, sponsored by Hughes Agency. The award honors individuals who assist women in reaching their full leadership potential and work to improve the quality of life for others, according to a news release.

Judge Merl Code and David Lominack, co-chairs of Greenville’s Race, Equity and Economic Mobility Commission, were presented the Buck Mickel Leadership Award, sponsored by Duke Energy. The award honors those who have had a dramatic impact on the community by playing a leadership role in solving critical community issues or providing visionary leadership to a major community development project.

Rich Hagins, CEO of US&S and former chairman of the Greenville Chamber, received the 2021 Chairman’s Award.

Mary F. Duckett, community leader of Greenville’s Southernside neighborhood and advocate for the construction of Unity Park, was honored with the F. Ben Haskew Collaboration Award, sponsored by Furman University, which recognizes Upstate leaders who display progressive visions and a partnership approach to responsible growth in the Upstate, according to the release.

Joshua C. Tew, a broker with Pintail Capital, was recognized for his leadership in the redevelopment of Laurens Road and support of minority-owned businesses with The Max Heller Neighborhood Improvement Award.

Dionne Sandiford, owner and threadmaster of Corporate Stitch was presented the Minority Business of the Year Award, sponsored by Bank of America. The award honors a local, independently and minority-owned company that has been in business for a minimum of three years and is a graduate of the Minority Business Accelerator program.

Harvest Hope Food Bank was announced as the 2021 Small Business of the Year, an award sponsored by Trehel Corp.

Kamber Parker, interim executive director at GAPS and owner of The YoPro Know, was honored with the Young Professional of the Year Award, sponsored by Michelin North America.