When it comes to friendliness, is size the key?

When online dealmaker Groupon started a recent story pitch to us with: “We’ve got some exciting news to share with you about the friendliness of Charleston local businesses!”

We had to ask ourselves, is that really news?

It’s not news that Charleston’s friendly.

It’s not news that the people are nice.

It’s not news that Charleston businesses are nice.

It’s not news that everyone is polite ... most of the time.

Even on our congested roadways, we are kind to our friends from New Jersey, Ohio and even North Carolina, helping them navigate our one-way streets and somewhat confusing bridges with a smile on our faces and a how-do in our hearts.

But what struck us about this list wasn’t that we were on it — honestly, it would have been news if we weren’t on it. What we noticed was that all of the cities on this list, aside from Hartford, Conn., are vastly larger than Charleston.

Maybe that’s important. Maybe we are nicer because we’re smaller. Hopefully, though, it’s a correlation that’s interesting but unrelated, because we want to still be making the lists of nice places to visit when Charleston’s the size of Miami.

Here’s the Groupon list. You can decide if it’s news or not, and we’ve added some Census Bureau data to add some value to the exciting information that “Charleston might be smaller but we’re also awesomer!”

Top 10 most friendly cities, according to Groupon customers

Groupon analyzed customer satisfaction ratings and sales data — since people vote with their clicks and dollars, that makes sense.

Groupon made a map, too. We dig the graphical representation of our Holy City skyline: 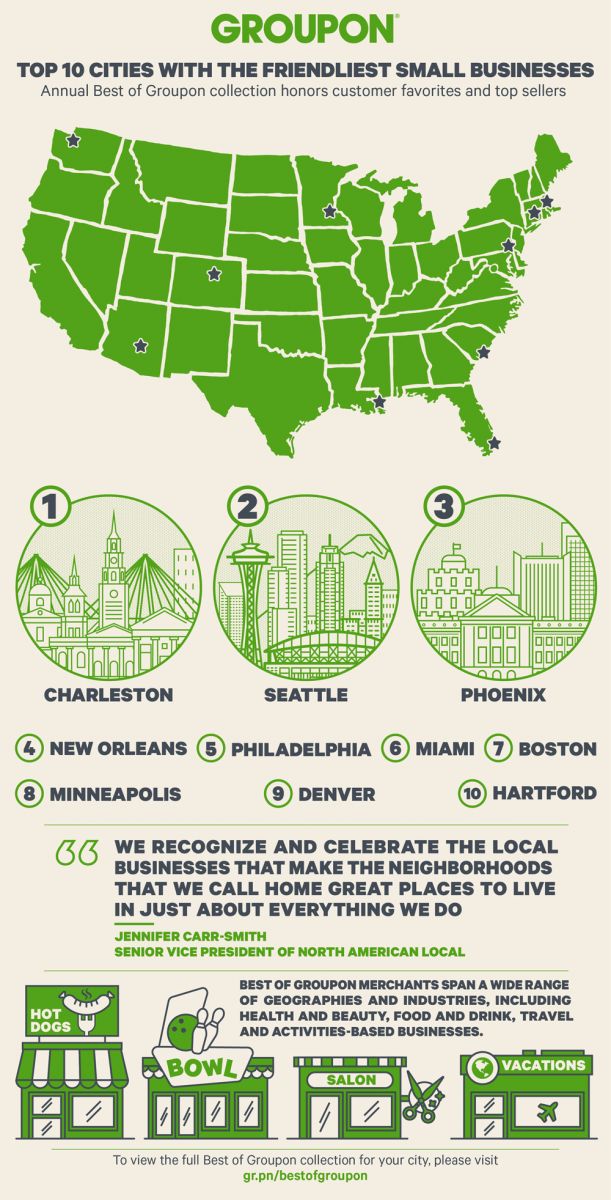