Three major developments were highlighted today during “Upstate Under Construction,” the theme for the latest GSA Business Power Event that featured updates about Greer Station, the city of Mauldin City Center and the Camperdown project in downtown Greenville.

“A city has to work hard to take care of its heart, which is its downtown — to keep it vibrant and strong, resilient and interesting. That’s what this project is all about,” Greer Mayor Rick Danner said about Greer Station, a $30 million project to redevelop downtown.

The centerpiece of the project, according to Danner, will be turning Trade Street into a shared street concept, “which we think is going to be new to South Carolina and largely new to the Southeast,” he said. “The shared street concept accommodates two-way traffic, parking, outdoor dining, extensive landscaping and decorative lighting all in a safe, friendly, pedestrian environment.” 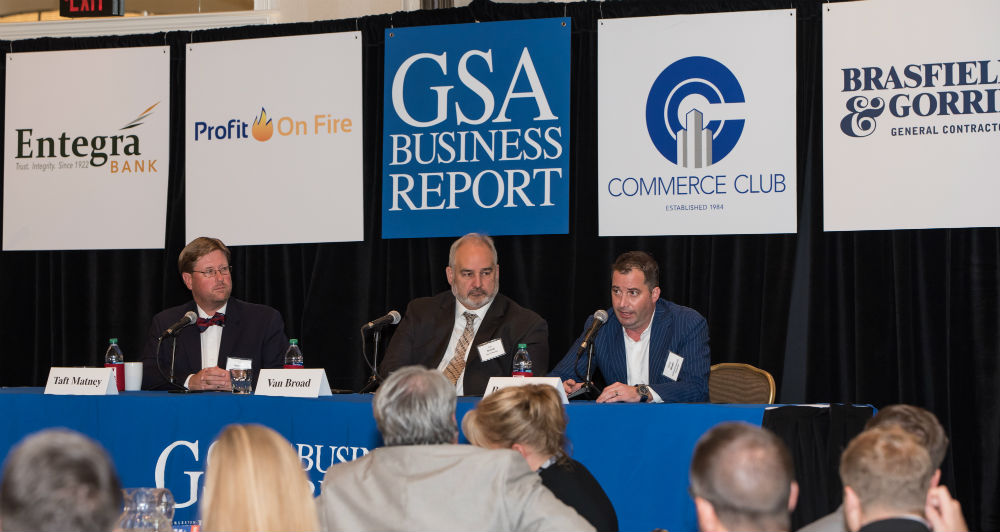 Danner also said the project will be completed without a millage increase or business license increase.

Other developments in Greer include the Greer Center for the Arts, which is undergoing a multi-million-dollar renovation. Also, a private developer plans to construct a hotel downtown, with outparcels and retail space adjacent to a 300-space parking garage constructed by the city, all without additional public taxes or fees, Danner said.

“This project will run concurrent with the streetscape project and a number of current renovation projects that will completely transform an entire block of our downtown,” he said.

Construction in downtown Greer is slated to start in the first quarter of 2019, with completion planned for the third quarter of 2020.

City Center in Mauldin is planned to be a mixed use, urban village along N. Main Street and E. Butler Road, extending the size of Mauldin’s downtown area.

“We have a blank canvas that allows us to create what we want from the ground up, and that’s what we have with the City Center project,” said Taft Matney, Mauldin City Council member. “We have about 24.5 acres of what we consider to be downtown Mauldin that are ripe for redevelopment.”

Van Broad, director of community development for Mauldin, said the project began many years ago with conversations with people in the community to find out how they thought Mauldin should move forward. “But we didn’t take the time (then) to engage property owners in that location,” he said.

“If we don’t have their buy-in to get the project done, we’ll never get it accomplished,” he said.

Work on the City Center project is expected to begin next summer.

The Camperdown project in downtown Greenville is progressing. Brody Glen, president of Centennial American Properties, which bought the former Greenville News site for $13.25 million from Gannett Co. Inc., said the project goal has always been to “get Camperdown back to what it originally was.”

“Camperdown was a mill village. It was a true definition of what live, work, play is,” he said.

The project, which covers 4.5 acres, will include office space, retail options, apartments and a hotel. Glen said workers spent a year blasting through granite and now have completed the garage at the site. The Greenville News office also is complete, he said. An AC Hotel also is planned for the site.

“Hotel construction is expected to start first of year and Falls Tower construction will start in the next 30 days,” he said. And as for interest in the site, Glen said the property is 90% leased.

Camperdown is expected to be open entirely in the second quarter of 2020, Glen said.