Zoning strategy could cost Greenville up to $266 million 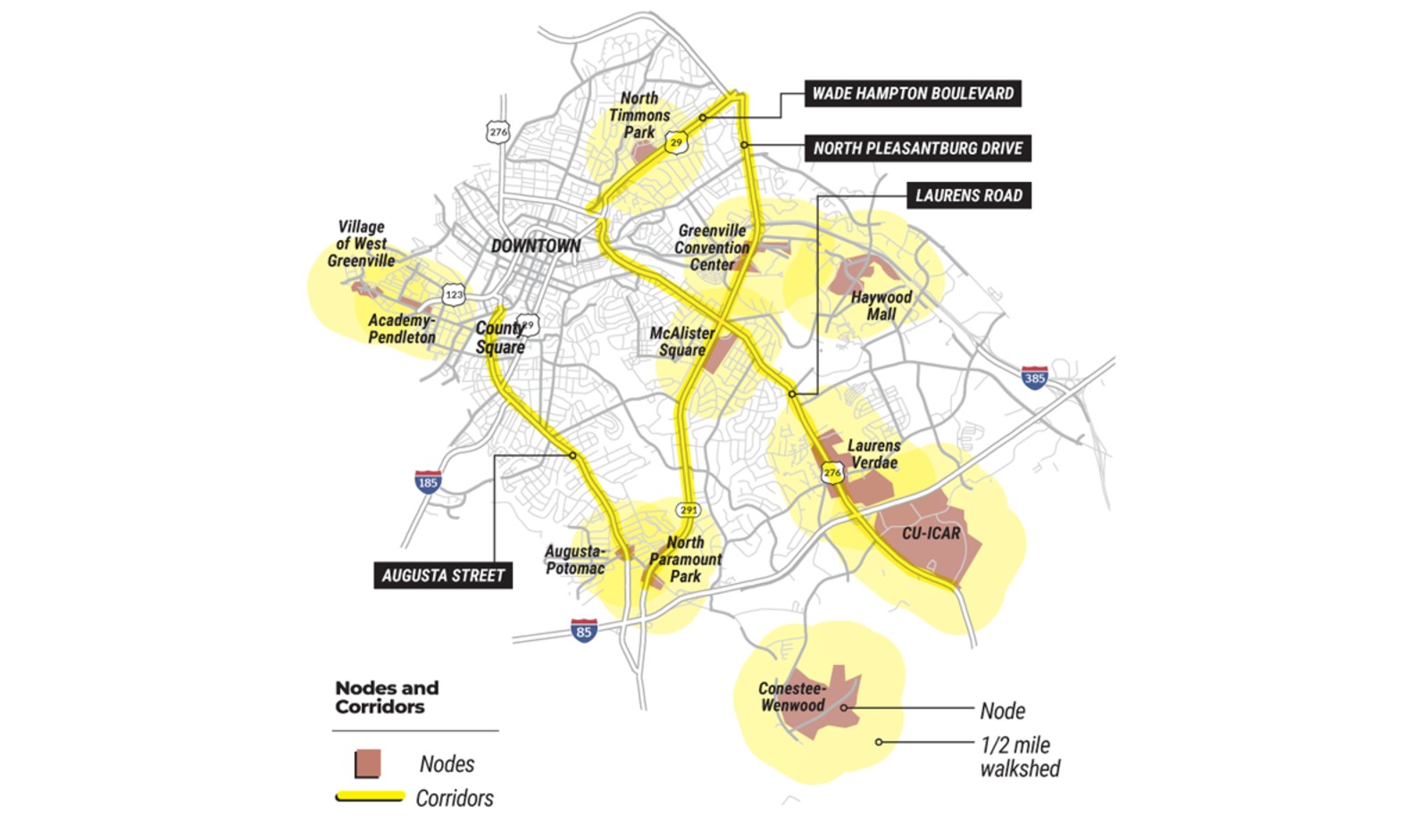 The strategy, launched in June 2019 with the naming of a 42-person steering community, has been directed by public comment through periodic surveys, panel conversations and consulting from urban planning firms Czb LLC and Ingalls Planning and Design.

Moved online because of concerns about COVID-19, this week’s open house and survey — debating the costs and trade-offs of the current development initiative — will conclude at 6 p.m. today.

One approach relied on existing zoning and building codes. Another popular scenario steered development to high-density areas but permitted all vacant land to be developed.

“The preferred direction, based on the work of the steering committee and public feedback includes continuing to grow, but directing growth into well-defined nodes and corridors with buildings averaging between four and six stories,” Beth Brotherton, spokeswoman for the city of Greenville, said in the video on the open house site.

The current taxable market value of these nodes reaches $275 million now, but the city expects it to expand to $3.75 billion to $4.25 billion after the development plan is underway, according to plan documents.

In the video, Brotherton said the favored scenario prioritized “making affordable housing an important and well-integrated part of the nodes and corridors, preserving a portion of Greenville’s vacant land as open space for parkland, and improving mobility options along important corridors to make it safer and more appealing to walk, bike and use transit.”

According to the survey, Greenville’s “sweet spot” for node development would lead to less than 30 residential units per acre. Outside of specified nodes, the city would maintain traditional neighborhood densities, while reeling back entitlements for additional growth.

Thus far, the city aims to protect 35% of the city’s vacant land as open space or park land through an estimated $113 million to $130 million investment. Despite the cost, the steering committee expects these conservation efforts to boost nearby property values to a cumulative $250 million, according to the survey, while mitigating potential environmental damage.

The committee’s current plans also argue that preserving these green spaces will aid the city as it seeks to make all major corridors accessible to alternative transit and ensure that 10% to 12% of all residential property developed over the next 20 years remains affordable for households earning $25,000 or less.

While urban density and targeted development could cover half of the costs from a 10% affordable housing goal, $2.5 million to $5 million remains unaccounted for, according to the survey. A 12% affordable housing level would add an additional $2 million investment. Installing a bus rapid transit system could cost between $50 million and $125 million per every five miles, while bike and pedestrian infrastructure costs could total between $3.75 million to $6.25 million for every five miles.

“Greenville has become one of the premier communities in the country because of planning that involved its people. We saw this with Vision 2005 and Vision 2025,” John Boyanoski, a steering committee member and president of Complete PR, told GSA Business Report in November. “A roadmap was created by the people working with elected officials. It puts a little pressure on our group because we have a legacy to match when plotting out the next 20 years.”